Alia Bhatt was damn excited for her south debut RRR. But due to the rise in Covid cases, the film has been postponed and will release in 2022.

Alia Bhatt was damn excited for her south debut RRR. But due to the rise in Covid cases, the film has been postponed and will release in 2022. There is a strong rumour that Rajamouli has decided to postpone RRR. The film will not release on October 12 as Maharashtra and other parts of the North Indian market have not opened up fully yet. While Alia's film is postponed she knows how to keep herself occupied. The actress shared the mantra of what's she is going to do as her release is getting postponed owing to the rise in COVID again. She shared a story on her Instagram account where she chalks up her to-do list. The story reads, " Start where you are, use what you have, do what you can". The actress used the hashtag #the good word. Also Read - Trending celeb pics of the day: Shweta Tiwari, Asim Riaz, Mouni Roy and more actors made heads turn today 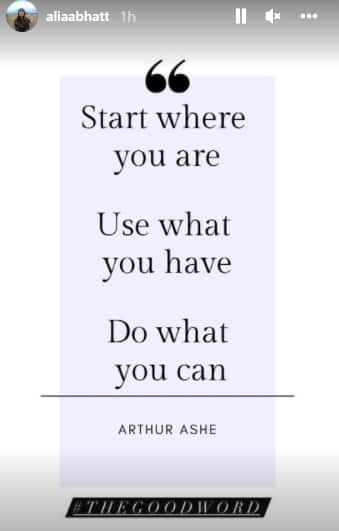 Alia will be seen playing the role of Sita, while Rajamouli in his interview had confirmed that the actress does not have a full-fledged role but is doing a cameo in it, " They are playing cameos in the film, I am not going to cheat the audience about it. In terms of importance, they are equally and sometimes they are more important than the heroes themselves." He even added, " A role cannot be based on its length. Both Alia Bhatt and Ajay Devgn’s roles are very important. If we look at RRR as a body, then Ajay sir’s character in the film is its soul."
Alia is also awaiting the release of Brahmastra with beau Ranbir Kapoor. The lovebirds will be seen together for the first time , however due to the pandemic the film has been getting delayed. We wonder even if this time the film will witnesses the same fate. In fact their wedding plans also got cancelled die to covid. Ranbir in his interview had said that he would be married if the pandemic wouldn't hit around the world.
Also Read - Trending Entertainment News Today: Sushmita Sen-Rohman Shawl meet after break-up, Alia Bhatt's Gangubai Kathiawadi new release date and more Stay tuned to BollywoodLife for the latest scoops and updates from Bollywood, Hollywood, South, TV and Web-Series.
Click to join us on Facebook, Twitter, Youtube and Instagram.
Also follow us on Facebook Messenger for latest updates.
Advertisement