Ranbir Kapoor, Aishwarya Rai Bachchan, Fawad Khan and Anushka Sharma's Ae Dil Hai Mushkil is all set to release but you will be blown away by the ticket prices...

Ranbir Kapoor, Aishwarya Rai Bachchan, Anushka Sharma and Fawad Khan's Ae Dil Hai Mushkil is one of the most anticipated films of 2016. In fact, the buzz around the movie before its release is sky high. However, one look at the ticket prices might just leave you surprised. While Ae Dil Hai Mushkil has managed to get a lot of screens, it has also managed to give you a wide range of ticket pricing. Yes, you can watch Ranbir's film for as low as Rs 70 and as costly as Rs 2200! Shocked? Yes, Rs 2200 is the most expensive ticket that is available for Ae Dil Hai Mushkil. But which multiplex is offering such an exorbitant ticket? It is more than the premiere most multiplex in India - PVR Director's Cut in Delhi. The outlet has the costliest tickets throughout the year and when we checked the prices for Ae Dil Hai Mushkil just now, we were completely SHOCKED! Rs 2200 for a VIP (Platinum Superior) seat is too much. Right? Also Read - Neetu shares 'like father like son' video comparing hubby Rishi and son Ranbir Kapoor

But that's not it. There are other cinemas who are charging a bomb for Ae Dil Hai Mushkil too. PVR (Ambience) in Gurgaon is also charging Rs 1600 for Gold class tickets. In Mumbai, the costliest ticket is Rs 800, which PVR: Market City - Kurla (Gold). Check out the screenshot of the ticket prices here: Also Read - Filmy Friday: Here's a look at the biggest HITS and FLOPS of Aishwarya Rai Bachchan 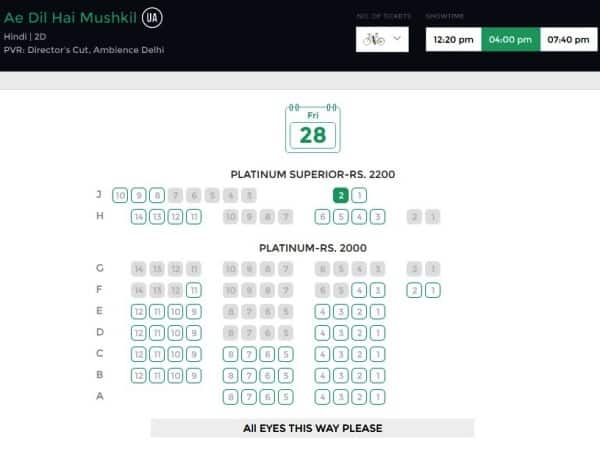 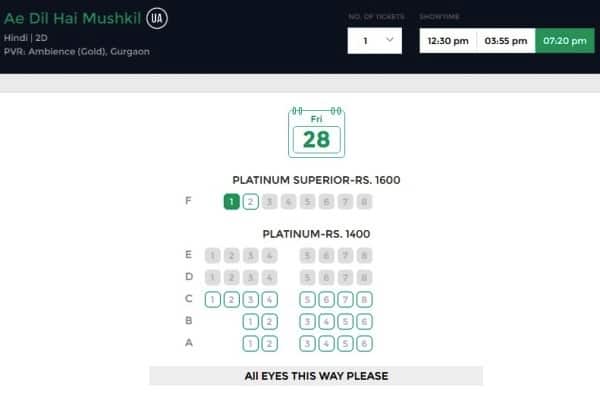 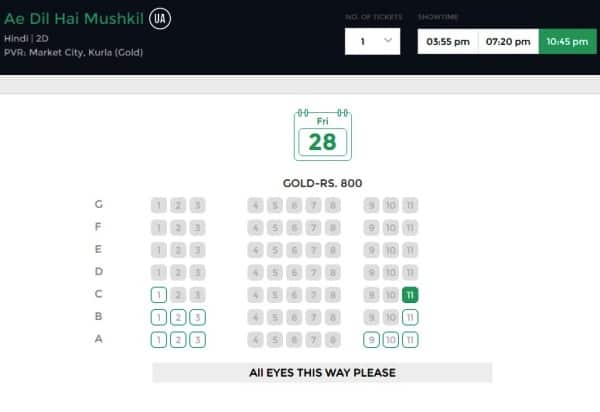 But will the exorbitant ticket prices hamper Ae Dil Hai Mushkil? Our trade expert and Editor of Super Cinema, Amul Mohan had revealed to us earlier, "No, that's never going to happen. Now-a-days, it is a norm for the multiplexes to hike the prices (during the release of such a big film). They want to cash in on these big films, so that's why you see these crazy big numbers. It is not something that would affect a movie. If a person is waiting to see a movie since a very long time, they would probably want to spend Rs 1000 on a ticket for a big film, rather than a smaller film. Smaller films don't have a big price tag. It is become a norm now. However, I personally feel that ticket pricing should be standardised. A Sairat made Rs 100 crores with tickets worth just Rs 100. Had they hiked their prices, sky would be the limit for them." ALSO READ - Ae Dil Hai Mushkil song Cutiepie: Ranbir Kapoor and Anushka Sharma look INSANELY AWW-DORABLE together

However, exhibitor and distributor - Akshaye Rathi had a slightly different take to this. He mentioned to us, "It (This exorbitant pricing) is not for milking the audience but for maximising the profit before piracy kicks in. Rs 900 per ticket plus popcorn, coke and conveyance is too much to spend for a few people. But having said that, people who want to see the film, will watch it." ALSO READ - Ae Dil Hai Mushkil movie review: Ranbir Kapoor, Aishwarya Rai Bachchan and Anushka Sharma's film gets a thumbs up from Kareena Kapoor Khan

What do you guys have to say about Ae Dil Hai Mushkil having the costliest ticket ever? Tell us about your thoughts in the comments section below! Also check out the trailer of the movie right here: