Rs 3 Lakh! That’s the amount you need to pay to be a proud owner of this gorgeous outfit worn by Priyanka Chopra

Priyanka Chopra is a stunner and there are no two ways about it. The actress is known for making some stunning red carpet appearances and baffle us with them, each and every time. Be it at the Oscars or the Emmys, her sartorial choices have always stunned us and made our jaws drop. And just when we were wondering if Priyanka Chopra can impress us any more with her fashion choices, she saunters and charms her way back into our hearts, looking like a vision in white. The actress, who was an influential speaker at the Global Goals Awards 2017, organised by UNICEF in New York City last night, wore a prepossessing white gown with a front slit from the house of Christian Siriano. Her dramatic shoulders gave the necessary wow element to her dress and needless to say, she set the ball rolling for fashion aficionados like us. Also Read: No one but Priyanka Chopra can carry a train so effortlessly – View pics Also Read - From sex symbols to powerful performers: The journey of Anushka Shetty, Kangana Ranaut, Priyanka Chopra and more actresses will leave you inspired

There are absolutely no doubts about PeeCee being the reigning queen, whose penchant to nail the trickiest of styles and looks often leaves her contemporaries gaping in amazement. But, there is no free lunch in this world. The outfit, that left you amazed, has a heavy price tag attached to it, which we are sure she didn’t mind paying. The white enchanting ensemble worn by Priyanka Chopra costs a whopping $4500 which is approximately 2,89,780 in Indian currency. Yes, that’s the amount you will need to pay if you want to get that outfit of hers in your wardrobe. For anyone who’s familiar with Christian Siriano as a designer, will know the fact that his designs have always made fashion look so accessible. But with his Resort 2018 collection, the designer has tried his hand at attempting something so distinct that only few or let’s say only the esoteric audience will be able to relate to. Also Read: Priyanka Chopra to attend bestie Meghan Markle and Prince Harry’s engagement? Also Read - From Ranveer Singh losing his virginity at 12 to Priyanka Chopra being asked to strip, Bollywood secrets that will leave you shocked 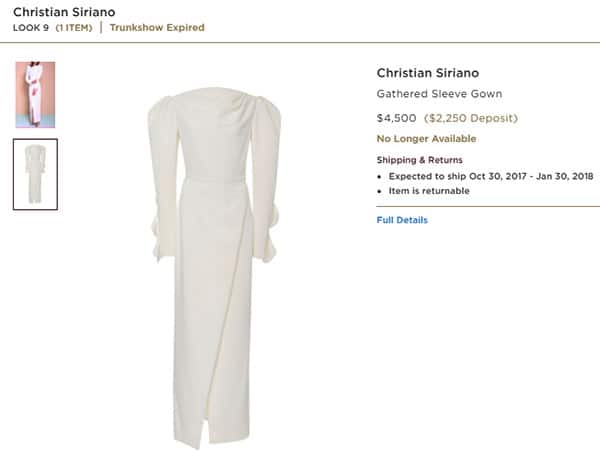 There is no doubt that Priyanka Chopra’s style game has undergone a drastic change since her debut in Bollywood. From someone who followed trends to being a trendsetter, PeeCee has come a long way and today she’s more or less, a fashion icon for many. From being a top Bollywood star to someone who’s equally popular and loved in Hollywood, Priyanka’s journey is a thesis in itself. Her on-screen roles have made us adore her always but her off-screen sense of style, too, has been voguish and swanky.