Rustom new poster: Akshay Kumar, Ileana D'Cruz and Esha Gupta will take you back to Nanavati case of the 50s!

The second poster of Akshay Kumar's upcoming film, Rustom is out and from the looks of it, we're convinced that the film features the story of the famous Nanavati case!

Akshay Kumar's love for making patriotic films and donning officer clothes has always helped him gain more attention of his fans. If you notice, he has done several films where he took up the role of a police officer or an army man. And now, we have a navy officer avatar of his as well! His upcoming film, Rustom, has already garnered a lot of attention thanks to Akshay's ridiculously dashing looks and the intriguing first poster. The first poster had the actor's eyes covered by the navy officer's cap whereas Ileana was in the background with another man! The poster also yelled "3 Shots That Shocked The Nation". Well, this did give us a hint that maybe the film was in fact, inspired from the famous Nanavati case. Also Read - Bhool Bhulaiyaa 2: Anees Bazmee REVEALS why Akshay Kumar wasn't cast in the sequel [Exclusive]

However, we chose to wait a bit more and decode exactly what the plot of the film is. But this second poster has completely given away the plot of the film for sure! If you notice, the second poster has Akshay Kumar in the background with his head low and with a gun in his hand. While the inset has Ileana with another man (the same guy from the previous poster). And again, the "3 Shots That Shocked The Nation" headline on the front page of a newspaper. This has made us to believe that the film in fact, has been inspired from the famous Nanavati case of the 50s that did shock the nation. We've jotted down five points about these revelations made by Rustom and linked it to the actual case. Also Read - Aashram 3: Is Esha Gupta's character for or against Babaji? Bobby Deol, Prakash Jha open up [Exclusive] 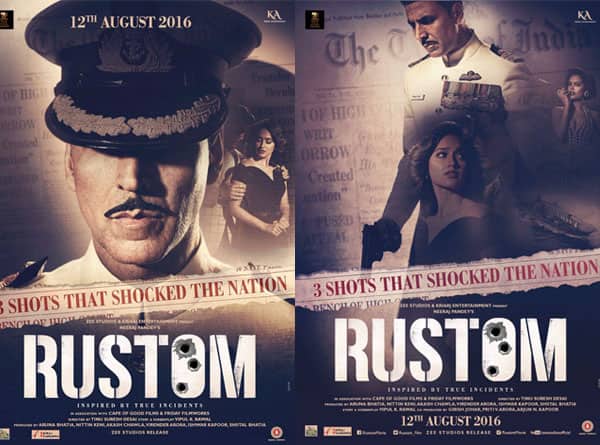 What's in a name? The identity that he's a Parsi

If you remember, even Kawas Manekshaw Nanavati was a Parsi. And Akshay plays the role of a Parsi naval officer, Rustom Pavri.

Crime, Passion or Crime of Passion?

The argument stated in the Nanvati case after Nanavati killed his wife's love and friend Prem Ahuja was that it was in the heat of the moment and that it was crime of passion resulting in the cold blooded murder. Even here as Akshay captioned the poster when he shared it, he wrote - Crime, Passion or Crime of Passion? which clearly indicates that it has something to do with the Nanavati case.

Based on the similar era when the original crime took place

Akshay Kumar had revealed earlier that the film was set in the 50s and was in fact even inspired from real incidents of the era. Needless to say, the crime too took place in the 1950s, 1957 to be more precise.

3 Shots That Shocked The Nation

That one sentence itself drove us to the conclusion that the plot of the film is that of the Nanavati case. In the Nanavati case too, three gunshots firing was heard that what followed next was the naval officer going to the Malabar police station and surrendering himself.

Ileana in the arms of another person

The not so subtle hint of a love triangle on the poster where Ileana is in the arms of another man while Akshay's in the background with a gun. Even in the Nanavati case, the man the naval officer shot was his wife's lover and friend Prem Ahuja in a fit of rage.

In brief, Kawas Manekshaw Nanavati, a naval officer met his English wife Sylvia in Britain and soon got married. However, when they shifted to Bombay, troubles started brewing in their relationship as Nanavati was always away with work. While Sylvia's loneliness and her inclination towards her husband's good friend, Prem Ahuja, made her fall for him. However, Sylvia was quite sure that Ahuja would not marry her if she left her husband. So when the naval officer arrived home, Slyvia broke down and told him everything about her marital affair. Kawas Nanavati accepted this and took his wife along with his kids to the theatre for a film that he had promised. But he excused himself midway during the movie and went to confront Ahuja. When Nanavati reached his household and spoke to Prem about this, he denied marrying his wife resulting in a fit of anger wherein the naval officer shot his wife's lover. The famous three shots that were heard and also created a rift between the two communities, Parsi and Sindhi. The biggest argument in this case was whether the firing was homicidal or in the heat of the moment.

This would be his second movie inspired by real incidents. Are you intrigued by Akshay Kumar's second adaptation of real life incidents? Tell us what you think of Rustom's posters in the comments section below!