Sachin: A Billion Dreams is easily the best movie on cricket, and whether you are a Sachin Tendulkar fan or not, you will find tears flowing through the sides of your cheeks at the end of the film. 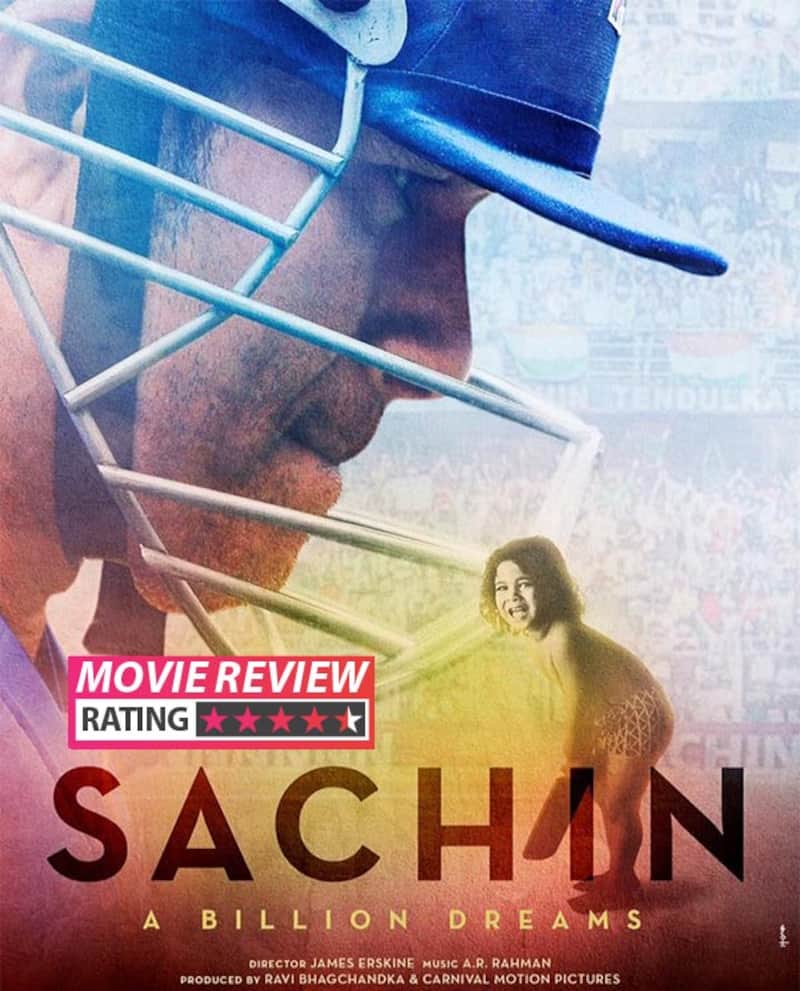 As a critic, Sachin: A Billion Dreams is the first documentary (if I can call it that) I get to review. As a cricket fan, (Well I was once upon a time, before the relentless onslaught of IPL), I am glad that a movie has been made on his life. I am not a Sachin Tendulkar fan though. I loved Rahul Dravid's techniques more. But I can never deny that it always had been a very special feeling to see Sachin bat. Coming to specifications, Sachin: A Billion Dreams is a one-of-a-kind cinema for India - a docu-drama that is getting a wide release. Directed by Emmy-nominated James Erskine, it is definitely an experiment when it comes to our box office. Will it pay off? Read our review to find out… Also Read - Sachin Tendulkar’s daughter Sara Tendulkar has got the HOTTEST workout outfits in her collection [View Pics]

Well, you know the story… it's about the fantastic journey of Sachin Tendulkar from the time when he was a mischievous kid, to that moment when he bid farewell to cricket and left many in tears. His childhood is shown through a dramatic representation, through actors who play his little self, as well as his family and coach, Ramakant Achrekar. Once he enters professional cricket, rest of the movie is told through a series of snippets and real footage, narrated by none other than the God of Cricket himself. Also Read - Sachin Tendulkar's daughter Sara Tendulkar flaunts her perfectly carved legs in THIS easy-breezy maxi dress [View Pics]

It's really strange that it took a foreigner to coach India to its World Cup win in 2011. Similarly, it also feels weird that it took a foreigner to make a movie on Sachin Tendulkar, and in the process, make the best movie on cricket - the sport. So let me say it, while Sachin may be a hero to billions, James Erskine's taut direction is the hero of the film. Not only has he captured the spirit of cricket and its effect on India through Sachin's journey, he also makes sure that you don't ever feel that it is a documentary. Rather, you feel that you are a part of the journey, or simply putting in better words, you are reliving the best part of your childhood. If you are a '90s kid and have breathed cricket like me, you will understand what I mean. What I liked the best about Sachin: A Billion Dreams is that it is not entirely about Sachin. It's also a journey of Indian cricket. It's also the story of his teammates and above all it is a celebration of his fans, who have cheered him, booed him but stayed with him throughout his career.

Some of the best moments to cheer for, during the film, were not even about Sachin. Perhaps it's that wicket of Aamir Sohail that Venkatesh Prasad flicked during the 1996 World Cup, or when Laxman and Dravid guided India to a historic win in the 2001 series against Australia, or Dhoni's iconic six that helped us win the World Cup. Sachin has not made it all about himself. But through these moments, he made us realise that Cricket is his everything, and sometimes it even came before his family. So when he talks about the infamous match-fixing scandal, you can feel the pain of betrayal he felt over certain colleagues. There are also many interesting tidbits about his life and career that you would easily lap up. Like, do you know which song Sachin always listens to when he feels down? Yes, the film answers it!

But it's his family moments that gives the movie its heartwarming appeal. The film begins with videos showing Sachin holding his kids after their birth. This itself indicates how much importance he places on his family. Be it his cheesy love story with his wife Anjali, who stood with him through the bleakest of times, or his emotional state when his father passed away on the eve of World Cup '99 - it's these moments that make us realise that the God is as human as any of us. Only he has used his adversities to rise up again like a phoenix. If there are enough moments to cheer about, there are also a few moments that will leave you teary-eyed.

Coming to technical values, both the editing and cinematography are top-notch and help make the movie an engaging watch throughout. AR Rahman's background score is perfect - it is thumping at times, but it never overshadows the moments. And the use of Vande Mataram song during the World Cup final is a master-stroke.

I don't know how the movie will appeal to the viewers who have never experienced Sachin in his prime - the ones who associate cricket with IPL and the T20 format. Or even those who have never been a fan of cricket. Even though the movie addresses the darker history of Indian cricket, like the match-fixing scandal and the Greg Chappell travesty, I feel the movie played a bit safe in those moments. The monkey-gate incident is completely ignored. Also, Sachin never reveals how it was to be playing under Ganguly, Dravid and Dhoni, after his rather unsuccessful stints as the skipper of the Indian cricket team.

Sachin, as a narrator, was a bit stiff, but then he was never an actor. However, he was rather free when he was around cricketing equipment.

Sachin: A Billion Dreams is a movie strictly for cricket fans. But then that's the entire country, including yours truly. At the end of the movie, a fellow journalist told me 'This is the happiest I have seen you after any movie.' It's true because I just watched a good piece of cinema where I became a cricket fan once again, and had relived my childhood. This is easily the best movie on cricket, and whether you are a Sachin fan or not, you will find tears flowing through the sides of your cheeks at the end of the film. Sachin: A Billion Dreams is highly recommended. Just make sure you cheer with the rest of the audience …Sachin…Sachin…!