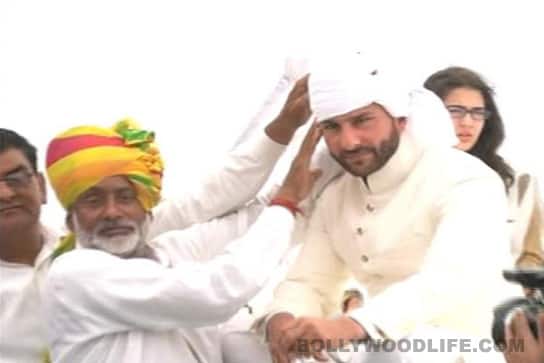 Today morning in an official coronation ceremony, B-town hunk Saif Ali Khan was crowned the 10th Nawab of Pataudi at the star-actor’s ancestral home. It had to be conducted after the 40-day mourning period for Mansoor Khan Pataudi was over. As a symbolic gesture the pagdi (headgear) was placed on the 41-year-old-actor’s head in the ceremony.While Saif’s mother Sharmila Tagore and sisters Saba and Soha Ali Khan were present at the ceremony, his girlfriend was missing as she is busy shooting with Aamir Khan for Reema Kagti’s film, Dhuan in London. Apart from the family members, the Chief Minister of Haryana, Bhupinder Singh Hooda and heads of 52 villages of the princely states were present for the coronation event. Last week the actor was sworn in as the Nawab. However, Saif has made it clear that he accepted the title to keep the villagers happy but would not like to prefix the title with his name. He wants his father to be remembered as the Nawab of Pataudi. Saif’s father, Mansur Ali Khan Pataudi’s mother was the daughter of the last Nawab of Bhopal, Hamidullah Khan. He was a patron of Auqaf-e-Shahi, the body managing the religious and charitable endowments of the princely state. Along with the title, Saif gets a new set of responsibilities of managing his father’s estate, the ancestral abode and continue the charitable and social activities for the state of Pataudi. Will Saif stand tall to all his responsibilities and his film commitments? Let’s wait and watch! Also Read - After Agent Vinod, Sriram Raghavan to make another thriller with Saif Ali Khan?