Saif Ali Khan's look is similar to a getup he flaunted in Cocktail. Don't you think so?

Saif Ali Khan is doing a lot of films lately. There's Chef which is releasing this October and then there's also Bazaar. There reports that he has been approached for a film on Batla House encounter. But nothing intrigued us more than Kalakaandi. First the name of the film... it's mouthful. In fact, however we try to pronounce it, we feel we aren't quite right. Also the fact that we suddenly got to know of this film with an earlier picture of him driving a car looking really happy also made it interesting. Bollywood hardly throws surprises at you and thus, this was indeed interesting. Now we have yet another image of the actor which immediately reminded me of Cocktail.

IIFA 2017: Saif Ali Khan leaves for New York with kids Sara and Ibrahim but where is Kareena Kapoor?

Well in this picture, Saif can be seen with small pony tails on his head and some make-up on his face. It's pretty crudely done but we are pretty sure it will have an explanation. Now coming to Cocktail, do you remember the scene where Deepika Padukone, Saif and Diana Penty are having fun at their home. They put make up on the actor's face and make him do crazy stuff. That was obviously a fun scene and we know for sure Kalakaandi is an intense movie. But we just couldn't shake off this feeling. Check out Saif's look from Kalakaandi here and the scene from Cocktail. You can compare for yourself... Also Read - Trending Entertainment News Today – Saif Ali Khan reveals one thing he would not dare to do with Kareena Kapoor Khan; Kriti Sanon celebrates her birthday with the media 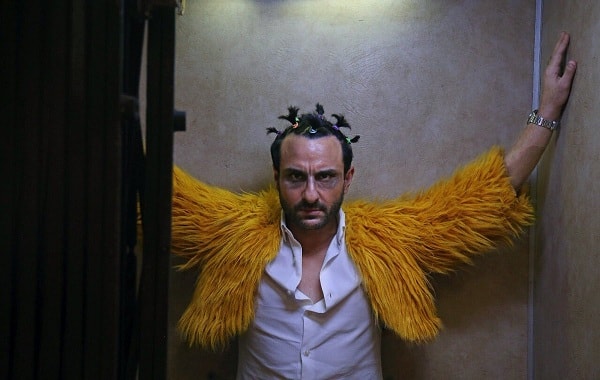 Talking about the story of the film, DNA quoted a source saying, "Saif's character discovers that he has cancer and is dying. He lives in denial for a while. Then, with his brother's wedding coming up, he decides to live life to the fullest, trying out everything he hadn't so far, including smoking, drinking and tripping on acid." Doesn't it sound interesting?