Salman Khan shoots an INTENSE scene for Sultan in a Delhi hospital!

Salman Khan s Sultan had made his fans go crazy all thanks to the teaser. Sultan s pehla daav has left us spellbound and now we all are eagerly waiting to watch the film.

Salman Khan’s Sultan had made his fans go crazy all thanks to the teaser. Sultan’s pehla daav has left us spellbound and now we all are eagerly waiting to watch the film. And Bhaijaan is equally leaving no stone unturned to make this movie a masterpiece of his career. Khan is intensively shooting for the film and right now he is Delhi to finish the prominent part of the movie. A few days ago Bhai’s picture with a National flag went viral while he was shooting and now this latest picture is making us even more RESTLESS. Also Read - Bigg Boss 15: Varun Sood strongly reacts to being termed 'arrogant' for his comment on GF Divya Agarwal's entry in Salman Khan's show

This picture shows bruised Salman Khan making an exit from the hospital with his ladylove Anushka Sharma. The shot looks extremely emotional. It seems like the Haryana ka sher was admitted in the hospital after a fight in the akadha and the crowd got gathered outside the hospital to confirm if their idol is fit and fine. Khan waves his hands along with Anushka showing the signal that he is completely alright and ready to hit back the ring. Reportedly Khan shot this scene in a school turned into a hospital set on Thursday. Wow this is INSANE! Also Read - Bigg Boss 15: Salman Khan talks about his relationship that has lasted the longest and we bet you won't be able to guess 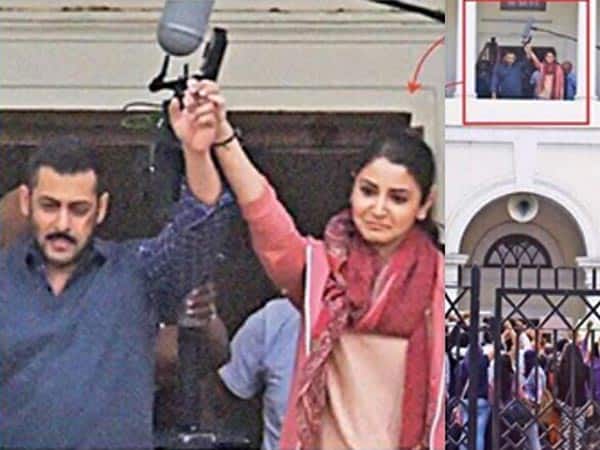 Also Read - Bigg Boss 15: Will the contestants be living in the jungle or a house this year? Host Salman Khan REVEALS

After completing the schedule in Delhi the entire team of Sultan will head towards Punjab and Haryana to finish the prominent part of the film. Well..Khan has indeed made his fans desperate with the teaser, wonder will happen when the trailer will be out. Hold your breath till June for the trailer.