Salman Khan will NOT forgive Arijit Singh and we tell you why!

Here's an EXCLUSIVE update on the same and you so cannot afford to miss it....

While everyone's debating on Arijit Singh's shocking apology to Salman Khan right now. Turns out Salman has no sympathies for Arijit. Yes! Our source exclusively reveals to us that despite having read the apology, Salman is in no mood to forgive him. Neither will he react or reach out to Arijit to resolve the issue. In fact, we hear how this apology note by Arijit has further reminded Salman of the whole miserable incident, making him feel even more worse about Arijit and his insulting remark. Whoa! Now that seems to be going a little too far! But sadly, that's how it is turning out to be and Arijit is going to get no forgiveness from Salman. We wonder if this is a clear sign that Arijit's song is bound to get deleted from Sultan. Also Read - Shah Rukh Khan hints at Pathaan 2; says he always wanted to do an action film like this ever since his entry in Bollywood

For all the ignorant, Arijit sent out a heart-felt apology to Salman stating, "If you felt insulted and I understood and I felt extremely sorry about it as me and my family have been your fan since long. I tried to explain so many times but you never got it. I apologized but you never got it. How many times I sent you apology texts you also know. No problem I apologize here In front of everyone but please it is a request Please do not remove the song that I sang for you in Sultan. You want anyone else to sing this song, absolutely fine but keep a version at least. I have sung enough songs sir. But I want to retire with at least one song of you keeping in my library. Please do not take away this feeling." Also Read - Trending Entertainment News today: Shah Rukh Khan's Pathaan look revealed, Sara Ali Khan calls Salman Khan 'uncle' and more

It's sad how Arijit, who has sung for so many big stars including Shah Rukh Khan, might never be able to sing for Salman. We worry if this regret might just kill him from inside. Your thoughts? Also Read - Pathaan FIRST LOOK: Shah Rukh Khan unleashes his rugged avatar as he completes 30 years in the industry; shares the release date 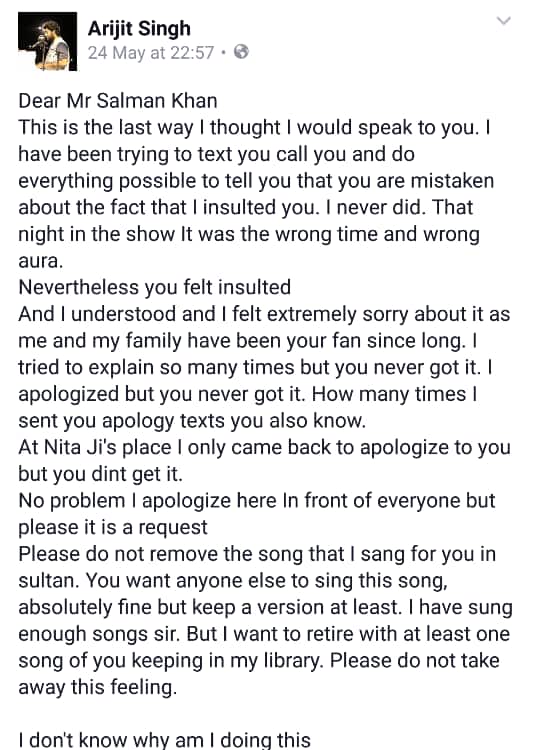