Samantha will be seen U-Turn and Seema Raja

The female superstar of the Telugu industry Samantha Ruth Prabhu, now called Samantha Akkineni is one of the few south stars, who enjoys a tremendous fan-following on the social media. The 31-year old actress has now achieved one more milestone on Twitter as she has garnered 7 million followers on this platform. Apparently, the actress is way ahead of the South biggies like Rajinikanth, Jr NTR, Thalapathy Vijay, Mohanlal, Dulquer Salmaan, Keerthy Suresh and Vijay Deverakonda in term of Twitter followers. Now, we must say, that's a huge achievement for Samantha. Also Read - BTS: Ram Charan and Samantha Akkineni's kissing scene in Rangasthalam - Here's how director Sukumar convinced the two stars 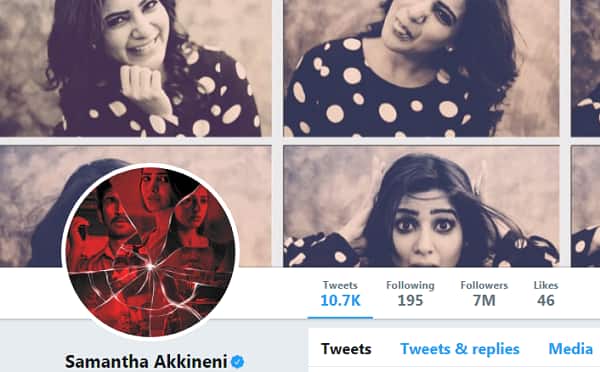 2018 has turned out to be a phenomenal year for the actress as her films like Rangasthalam, Mahanati and Irumbu Thirai have performed exceptionally at the ticket windows. In fact, Rangasthalam, which also featured Ram Charan in a lead role has grossed over Rs 200 crore at the worldwide box office. Interestingly, the actress portrayed different character in all these films, which definitely proves the versatility of her.

On the professional front, the actress has two kitties under her belt, which are U-Turn and Seema Raja. Apparently, both the films are releasing on the same date, which is September 13 (Ganesh Chaturthi). So apparently, it'll be Samantha versus Samanth at the box office. Which will be your pick? Tweet to us to let us know...