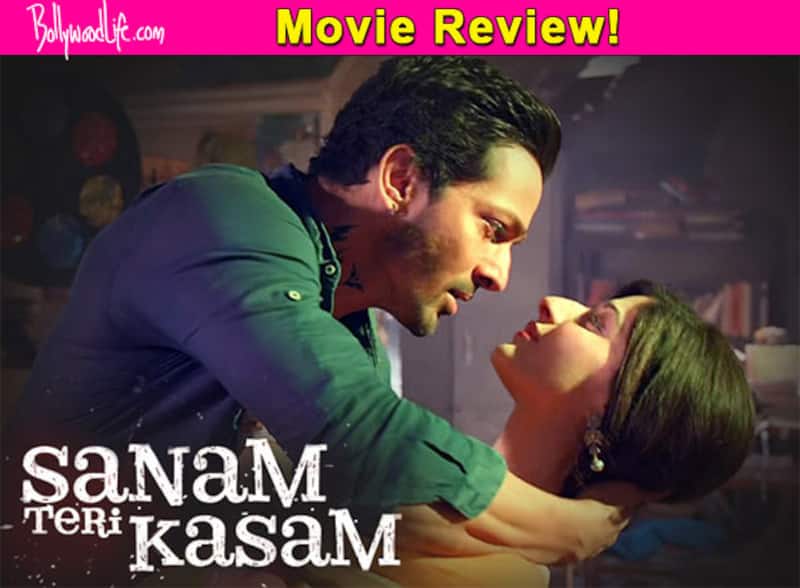 After two back-to-back sex comedies in the theatres this Friday will see the return of action hero Sunny Deol with Ghayal Once Again and a love story that marks the debut of two good looking actors in Bollywood. Since action isn't my genre, I decided to go binge on some romance...

Sanam Teri Kasam is a bad throwback to the over the top 90's melodrama that we have happily surpassed. In a time where scripts are progressive and innovative, STK reminds us what we hated the most about those loud, garish, hammy movies that now have become fodder for YouTube jokes. Newcomers Harshvardhan Rane (Inder) and Mawra Hocane (Saraswati) play lovers who are cursed by fate to never unite. Circumstances and situations around them are so dire (no pun intended!) that they are made to suffer through out the film. The first half has Mawra play the geek ugly duckling, who no one wants to romance. While Harsh plays the intense brooding hero who has a dark past and a strange aversion to clothes (his well chiselled torso gets more footage than his acting). There is ample rona-dhona for Mawra to do, in fact her crybaby act is stretched beyond requirement in the film. And Harsh despite his elusive past has a one dimensional track. The promos have already given us a glimpse of what happens in the climax, so that isn't much of a surprise! Also Read - [EXCLUSIVE] Rashmi Rocket: Were Priyanshu Painyuli and Abhishek Banerjee intimidated by Taapsee Pannu? The duo spill the beans

The chemistry between Mawra and Harsh is real! There is an immediate likeability to this jodi. Also the first half, especially the scenes that establish Mawra's character has some nice moments. There is potential in both these actors to let this shoddy debut pass and attempt some real good films. Harsh has the mix John Abraham's (his cousin) physique and the intensity of a new age loverboy. Mawra is more than a pretty face and proves that in several scenes in the film. The songs are catchy, Kheech Meri Photo being a major highlight.

The major guffaw with STK is the excruciating length. The film could have easily done away with at least 30 minutes. Despite knowing the end, the climax drags its feet to forever culminate into an end. Also the directors treatment of the subject is extremely poor. There is very little scope for humour in the film, and grey clouds of depression linger through out the storyline. In fact the background music and writing is almost like an Ekta Kapoor TV show, characters cry and cry till their glycerin wears out and ham it out till we start shifting in our chairs with discomfort. If the idea was to make a Tere Naam or an Aashiqui 2 then STK should have gone all out keeping the fabric of its script in mind.

Sanam Teri Kasam had potential in the form of two promising debutantes Mawra Hocane and Harshavardhan Rane, but a regressive script and over the top direction killed it from becoming more than just another tragic love story.