Amidst his busy schedule for Bhoomi, Bollywood star Sanjay Dutt managed to take time out to visit the famous Shri Mankameshwar Mandir in Agra on the auspicious occasion of Maha Shivratri.

Amidst his busy schedule for Bhoomi, Bollywood star Sanjay Dutt managed to take time out to visit the famous Shri Mankameshwar Mandir in Agra on the auspicious occasion of Maha Shivratri. Despite the hectic schedule Sanjay Dutt ensured that he visited the temple and paid his respects. The actor was accompanied by Shekhar Suman and they both offered prayers at the temple, as you cans see in the picture. For all those who don't know, Sanjay has started shooting in Agra for his comeback film Bhoomi which also stars Aditi Rao Hydari in the lead role. (ALSO READ: Maha Shivratri special: Kailash Kher and Prasoon Joshi’s Adiyogi – The Source of Yoga is a captivating tribute to Lord Shiva) Also Read - Top 5 Imtiaz Ali films to watch on Amazon Prime Video, Netflix, Disney+ Hotstar, Voot, and more 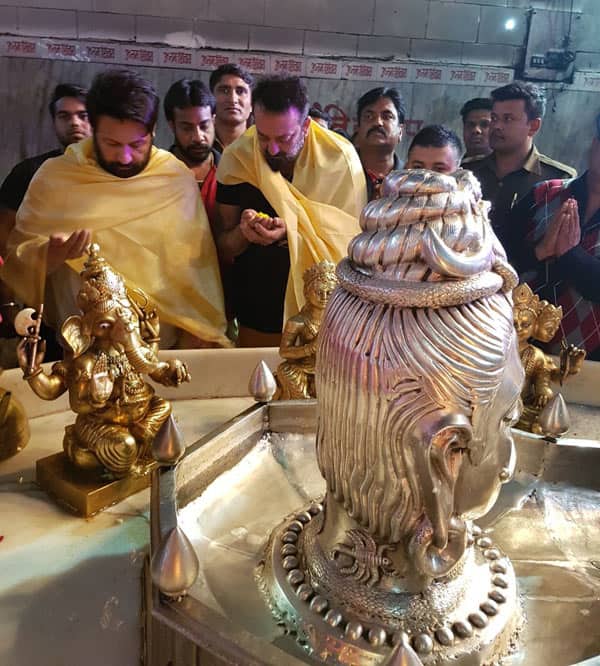 Talking about his comeback project, the film is directed by Omung Kumar and the plot of the movie revolves around the relationship between a father and daughter. Actress Aditi Rao Hydari is cast in the role of Dutt’s daughter. Shekhar Suman is also part of Bhoomi. And Sharad Kelkar plays the villain in the film. “With much zeal surrounding the comeback of Baba on screen and the exciting new father-daughter Jodi played by Sanjay and Aditi, we are looking forward to flag off the mahurat in Agra,” producer Bhushan Kumar had said earlier. Bhoomi is scheduled to release on August 4. Also Read - Super Deluxe, Soorarai Pottru, Karnan and more: 10 extraordinary Kollywood films which you can binge watch on OTT platforms

Originally, Dutt wanted Aditi’s role to be portrayed by Alia Bhatt. The young actress is on every filmmaker and actor’s list to work with because of her immense talent and recognition. Reports state that she denied doing the movie and was in fact, hell bent on not doing playing the part in Bhoomi. The makers then decided to approached Hydari, who gave it a go. On the auspicious occasion of Maha Shivratri, Amitabh Bachchan, Akshay Kumar, Sonam Kapoor and other celebs took to Twitter to wish fans.