Sanjay Dutt out of 'Munna Bhai'? No! 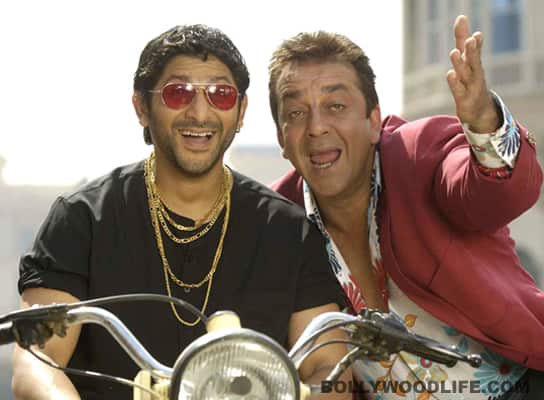 Arshad Warsi and he won’t be reprising their roles in the third Munna Bhai film...or so we are told

It’s Sanjay Dutt’s birthday today, so naturally I was in a celebratory mood. What do I hear instead? That he is being replaced as Munna Bhai! I almost laughed at first, thinking it was a joke. What were Vidhu Vinod Chopra and Rajkumar Hirani thinking? No one else can ever be Munna Bhai. Or Circuit. Yes, they’ve axed Arshad Warsi too and are looking for some 'fresh faces'. Okay, so the two have aged since they first played the peace-loving don and his right hand man, but so what? It’s not as if they were some rosy cheeked debutants then. And we still loved them! When you have a movie with two buddies, it’s all about the chemistry. Think Amitabh Bachchan and Dharmendra in Sholay. Or Aamir Khan and Salman Khan in Andaz Apna Apna. You do agree that no one can recreate that magic, right? Then why tamper with Munna Bhai and Circuit? Of course, if Chopra and Hirani were creating new characters as spinoffs, then yes, I would have been eager to see that. But now, really, Munna Bhai and Circuit can go to Amerika or Timbuktoo, I couldn’t be bothered less. What about all you die-hard Sanjay Dutt fans out there? Will you see a Munna Bhai film without your idol? Tell me! Also Read - Amidst divorce rumours with Naga Chaitanya, Samantha Akkineni enjoys her favourite activity with friends- see post

Also Read - Naga Chaitanya follows Samantha Ruth Prabhu; after The Family Man 2, now the Love Story star to play a negative character in his debut web series? Stay tuned to BollywoodLife for the latest scoops and updates from Bollywood, Hollywood, South, TV and Web-Series.
Click to join us on Facebook, Twitter, Youtube and Instagram.
Also follow us on Facebook Messenger for latest updates.
Advertisement