Sanjay Dutt's daughter Trishala Dutt pens an emotional note on father’s past drug addiction; says, 'Nothing to be ashamed about'

The Bad Boy of Bollywood, Sanjay Dutt's drug tryst is known to everyone. While the actor has spoke about overcoming his addiction, daughter Trishala Dutt penned a note on father's addiction, which will make you teary-eyed. The long note reads, ""First it's important to note that addiction is a chronic disease characterised by drug seeking and use that compulsive, or difficult to control, despite harmful consequences. The initial decision to take drugs is voluntary for most people, but repeated drug use can lead to brain changes that challenge an addicted person's self-control and interfere with their ability to resist intense urges to take drugs." Also Read - Happy Friendship Day 2021: From Salman Khan-Ajay Devgn-Sanjay Dutt to Suhana Khan-Ananya Panday-Shanaya Kapoor, these Bollywood stars redefined friendship beyond words – watch video 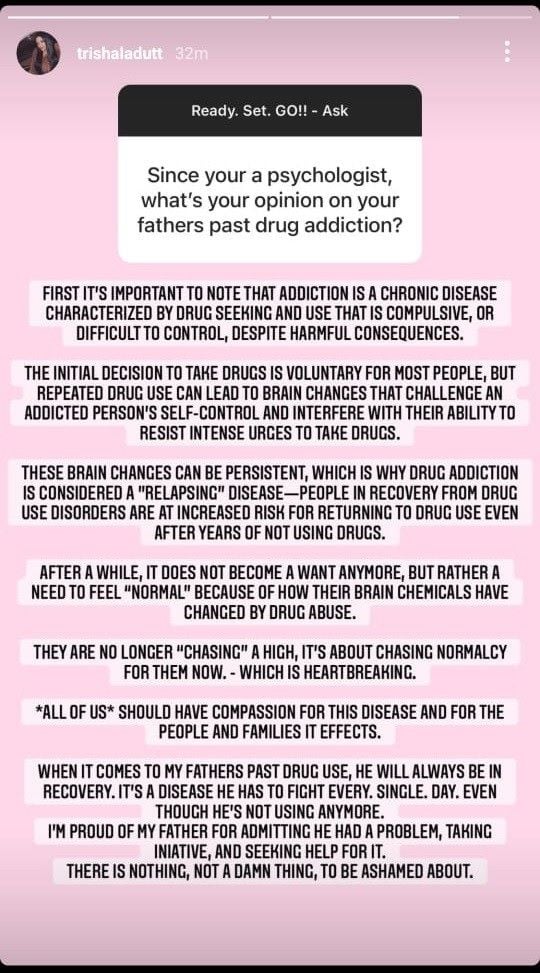 Also Read - Bell Bottom, Bhuj: The Pride Of India, Navarasa and more: List of movies and series arriving on OTT platforms and cinema halls to make your August super-entertaining

She added, "When it comes to my fathers past drug use, he will always be in recovery. It's a disease he has to fight every.single.day. Even though he's not using anymore. I'm proud of my father for admitting he had a problem, taking initiative and seeking help for it. There is nothing, not a damn thing, to be ashamed about." Also Read - Friendship Day 2021: From Shah Rukh Khan-Salman Khan to Priyanka Chopra-Kareena Kapoor – 7 Bollywood BFFs who turned foes and then became friends again

Recently, when Harsh Limbachiya and Bharti Singh were arrested by NCB for consuming drugs, Johny Lever told TOI that they should accept their mistake like Sanjay Dutt and said, "I would like to say one thing to both Bharti and Harsh. Once you guys come out, speak to your colleagues both young and old not to indulge in drugs. Look at Sanjay Dutt, he confessed to the world. What bigger example do you want? Accept your mistake and pledge to quit drugs. Nobody is going to come to give you a bouquet of flowers for this case." He added, ,"I tell students not to indulge in drugs. Kyonki jail jaoge and jail is not a place for creative people like us. Taking drugs is a sign of weakness and it only spoils your health and your name. It affects your career also. We seniors and those who have confessed, need to counsel our juniors or else our industry will be doomed." He also shared a real-life incident and said, "I remember Kalyanji or Kalyanji Anandji fame found out that I drink. He told me, 'Johnny bhai sharab mat piyo...talent mein itna. nasha hai usse piyo'. "