Recently, one of Sanjay Dutt's daughter Trishala's Instagram follower was curious to know the details of her boyfriend's death since she has never spoken about it. But Trishala didn't take this lying down.

It's been almost 2 years since Sanjay Dutt's daughter Trishala's boyfriend passed away. A heartbroken Trishala had shared an emotional post on Instagram mourning his death. Last year too, she had penned an emotional note and opened up about going for therapy and quitting her job post his demise. Recently, one of her Instagram follower was curious to know the details of her boyfriend's death since she has never spoken about it. And Trishala didn't take this lying down. She lashed out at her follower for asking such insensitive question. Also Read - BREAKING! Contrary to reports, Yash's KGF 2 to not release on 9th September, makers eyeing THIS festive weekend? [EXCLUSIVE]

"Sorry to ask this but why haven't you disclosed how your boyfriend passed away? What's his name," the Instagram user asked. To which, Trishala gave a befitting reply saying, "I appreciate your question. I do. Let's all be honest about basic human behavior and curiosity - Its natural to want to know how someone passed away. Even if it is 'none of your business,' right? The most inappropriate reaction is enquiring about the cause of death." Also Read - Finally! Yash and Sanjay Dutt starrer KGF 2 to release on THIS date; read deets inside

She continued, "I want you to ask yourself this question - What is the purpose of me doing/ asking this? Will knowing the answer allow me to help this person. Or is it just morbid curiosity? Grief 101 lesson- 'If you are not entitled to know the specifics of the passing, stop asking. Asking for those details does nothing for the conversation. It does not console the person, nor brings the person who passed away, back.'" Also Read - Karan Arjun, Baazigar, Soldier, Dacait, Ram Lakhan, Rocky – Rakhee’s sons keep taking her BADLA, proving that ‘hell hath no fury like a mother scorned’ 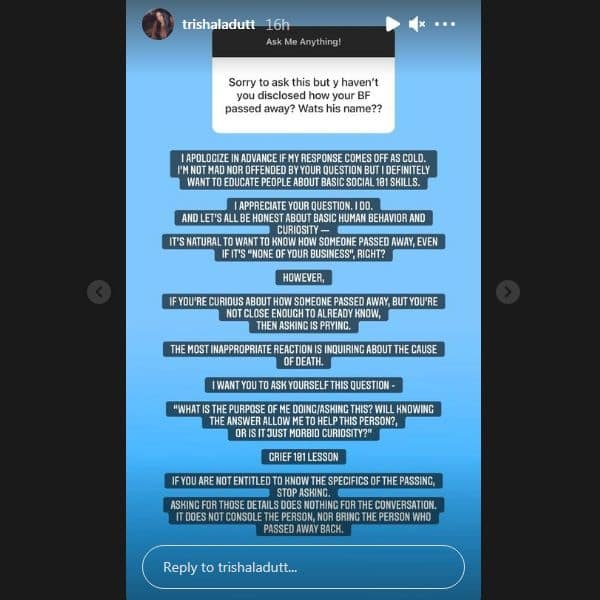 Last year, Trishala had said that in the past year she cried to a point where she ran out of tears. She said that she had several "public breakdowns where strangers have come up to me and asked if I needed any assistance." She added that she ate "everything in sight and gained 30 lbs (13 kilos)."

Trishala shared that her boyfriend respected her, never judged her and welcomed her into his family. To Trishala he was magic. "It was a joy to be a part of his life. He will always be apart of my journey, and my story. My memories are all I have left of him, and I will never ever forget him. I'm half a heart without him, but even with that, I still and will always be and feel like the luckiest girl in the entire world to have been his...as he was mine. October 07, 1986 - July 02, 2019," she had written on Instagram.