Saif Ali Khan's daughter's relationship with her boyfriend Veer Pahariya seems to be going really strong and here is proof!...

One of the celeb children everyone is dying to know about is Saif Ali Khan's daughter Sara Ali Khan. She recently returned from abroad after completing her education there. Lately she has been in the news because of her relationship with boyfriend Veer Pahariya, which is going really strong. Now, it looks like the couple has taken things one step further. Also Read - Sara Ali Khan celebrates Diwali with Ibrahim, Kareena Kapoor Khan, Saif Ali Khan and little Taimur

Sara Ali Khan was recently spotted outside a theater in Bandra for the special screening of Sairat. As she got in her car, a ring can be seen clearly on her left hand. The ring actually reminds us of a promise ring that couples exchange as a pre-engagement ring or when they are in a really serious relationship. Does this means that Sara and Veer are ready to take things to the next level? Well, nothing is certain so far, but things do looks promising. Also Read - Sara Ali Khan and Ibrahim Khan’s sibling bond in this click is absolutely adorable!

Meanwhile, Sara has big plans for making a debut in Bollywood. She will mostly be launched in a Mohit Suri film. Also Karan Johar himself is ready to set up her entire cine career, just like he did for Alia. She has also been spotted with her boyfriend going on fancy dates, hanging out with her dad a couple of times, and recently she was clicked playing tennis with her dad Saif Ali Khan and brother Ibrahim. Also Read - Poll Results: Sara Ali Khan beats Janhvi Kapoor and Ananya Pandey to become the favourite star kid of 2018

Well, Sara looks absolutely stunning as always and definitely looks Bollywood ready. As for whether it was a promise ring or not, we don't think she will be telling that to anyone. 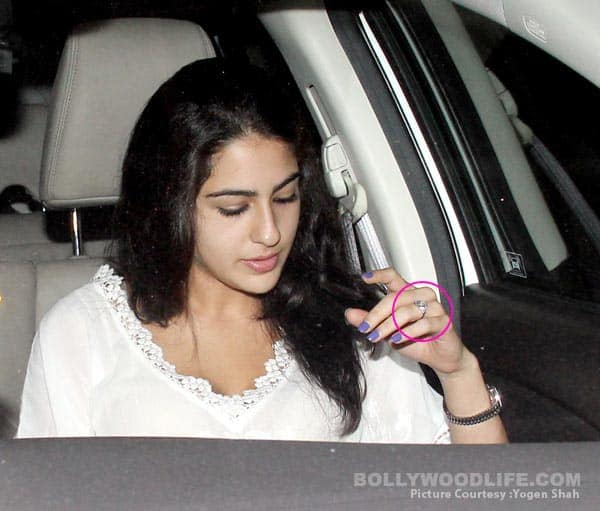