In a video that the Atrangi Re actress shared on her Instagram stories, Sara Ali Khan was seen enjoying a sunset walk on the beach during sunset.

Sara Ali Khan has been making the most out of the lockdown time. Unwinding herself from busy shoot schedule, Sara had recently flown to Kashmir along with her mother Amrita Singh and brother Ibrahim Ali Khan. And now the Atrangi Re actress has hit the Maldives beaches ad was seen exuding major vacay goals. Also Read - Jawaani Jaaneman actor Alaya F REACTS to comparison with Ananya Panday and Sara Ali Khan

In a video that she shared on her Instagram stories, Sara was seen enjoying a sunset walk on the beach during sunset. She was seen wearing a white knee-length dress and left her long locks open. Also Read - After Karnan's success, Dhanush announces reunion with director Mari Selvaraj — deets inside 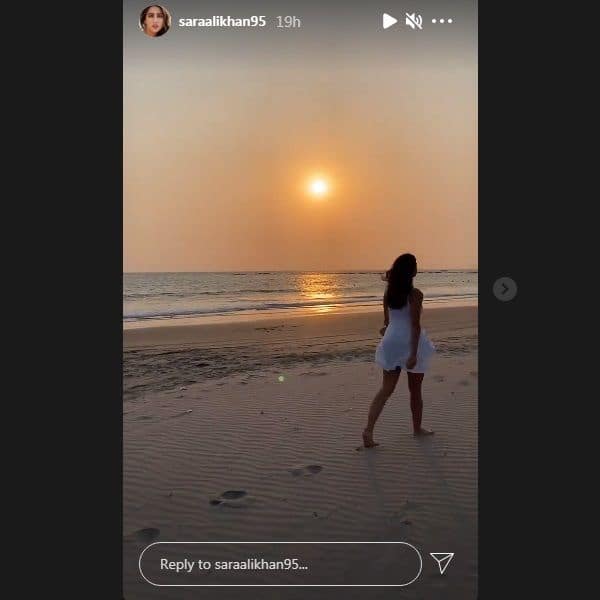 Also Read - When fans got too close to Arshi Khan, Deepika Padukone, Sara Ali Khan, Salman Khan and other celebs

Sara will next be seen in Atrangi Re, co-starring Akshay Kumar and Dhanush, and directed by Aanand L. Rai. The film is written by Himanshu Sharma and is billed as a cross-cultural love story.

Sara had recently revealed that she used to stalk Akshay Kumar while shooting their upcoming film, Atrangi Re. Sara took to Instagram to talk about the Aanand L Rai directorial that has just concluded shooting. She shared stills from the set on Instagram along with her post, too.

"That's a film wrap. Ek saal baad. Thank you so much @aanandlrai sir for giving me this role, this film and this opportunity. But more than that thank you for your unconditional love, unwavering support, the best India darshan, delicious khana, early morning sunrise drives to location, sufi ginger water evenings, and the most memorable year with the best team," she had written.

Atrangi Re went on floors in March 2020, in Varanasi. The team resumed shoot post lockdown in Madurai, followed by schedules in Delhi and Agra. The film is slated to release on August 6.