Has Sara Ali Khan won you over with her ultra glamorous avatars in real life? Well, now get ready to be surprised by the young beauty as she dons a new look for her Bollywood debut... For all those of you who've been eagerly waiting for the debut of Saif Ali Khan and Amrita Singh's daughter Sara Ali Khan, we have some news. The actress who has been making an impression with her stylish outings and winning over the fashion police with her great sartorial choices will play and almost de-glam role in Abhishek Kapoor's Kedarnath. Yes, the film that marks Sara's entry into Bollywood alongside Sushant Singh Rajput, will see Sara looking nothing like she does in real life. A source close to the movie revealed that the young beauty will be all "covered up" in this film. Sara is one of the most hot looking star kids and there has been a lot of anticipation about her entering movies. Her makeover became a hot topic of discussion. Also Read - Mukesh Ambani celebrates grandson birthday bash: Karan Johar, Rohit Sharma’s wife Ritika and others arrived with their kids in style [Watch Video]

And coming back to Sara's look in the film an insider revealed, "Sara is known for her sexy style statements, but in Kedarnath she will be all covered up. She will be donning some very simple and basic looks in this movie." Now we all know that this film is going to be a pilgrimage love story. And we are all keen to see how Sara and Sushant's new jodi brings on to the screen. (Also read: Sara Ali Khan’s debut film with Sushant Singh Rajput, Kedarnath, will release in June 2018) Also Read - Ranbir Kapoor, Vicky Kaushal, Ranveer Singh: Times when celebrities turned photographers for their partners and showcased their skills

Rumours also suggested that Karan Johar had taken Sara under his wing and was planning to introduce her just like protege Alia Bhatt with Student Of The Year 2 alongside Tiger Shroff and another actress. However, looks like Abhishek Kapoor beat Karan in the race. Buzz was also that Sara' mommy Amrita Singh wasn't too pleased with Sara signing up for a two hero project for her debut. (Also read: Decoding Sara Ali Khan’s MASTERPLAN ahead of their Bollywood debut) Also Read - Akash Ambani-Shloka Mehta's son birthday bash: Karan Johar with kids, Krunal Pandya, Isha Ambani and more celebs join the party 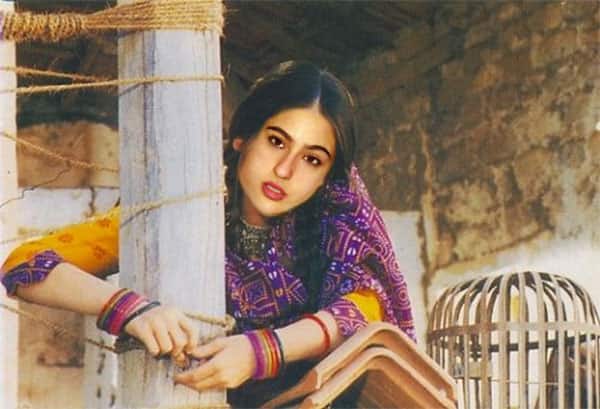 Coming back to Kedarnath, Sara's look in this film might even remind some of Kareena Kapoor Khan's rustic look from her debut film Refugee. Well, we hope that the young beauty manages to scale great heights of success like others in her family.