Amitabh Bachchan's Sarkar 3 is a major letdown for those who expected RGV to make a major comeback here. 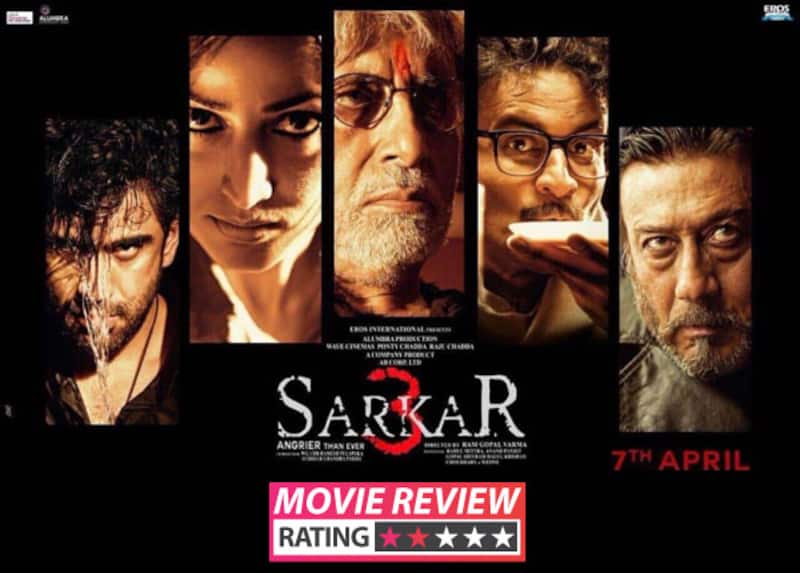 Sarkar 3 is the final nail in the coff…oops, I mean the final installment of Ram Gopal Varma's Godfather inspired trilogy. The first movie, Sarkar, came in 2005, the sequel Sarkar Raj was released in 2008, now the third part comes nearly a decade later with only Amitabh Bachchan and Supriya Pathak returning from the old cast. The new players this time are Amit Sadh, Yami Gautam, Manoj Bajpayee, Ronit Roy, Rohini Hattangadi and Jackie Shroff. Will this movie save a once-brilliant director like Ram Gopal Varma's declining career? Read the review ahead to find out… Also Read - Shah Rukh Khan, Aamir Khan, Salman Khan and more biggest superstars of Bollywood and their first salaries

What's it about Also Read - Kriti Sanon, Amitabh Bachchan, Suriya and more celebs who were overwhelmed with Prabhas' hospitality

Years have passed since the death of his son (Abhishek Bachchan, confined to large photo nailed to the wall), but Subhash Nagre (Amitabh Bachchan) or Sarkar, as he is called by everyone, is still a force to reckon with. He is aided by a trusted lieutenant, Gokul (Ronit Roy), who is looked as Sarkar's successor, but the arrival of his hot-headed grandson Shivaji aka Chikoo (Amit Sadh) complicates things. When Sarkar refuses an illegal rehabilitation scam, he invites the wrath of a shady broker called Gandhi (like, seriously...one character even calls him Gandhiji!) and his boss Walia (Jackie Shroff), a Dubai-based tycoon who cavorts with a skimpily clad girl. Shivaji's girlfriend (Yami Gautam) also wants to settle an old score with Sarkar. There is also a Kejriwal-like politician (Manoj Bajpayee) who wants to destroy Sarkar's image. Things get further complicated when an assassination attempt is made on Sarkar's life, and he is made to believe someone close to him is behind this. Also Read - Shah Rukh Khan, Disha Patani, Ranveer Singh and more: Bollywood actors and their lesser-known siblings

Amitabh Bachchan is an actor who can even make a bad movie watchable with his immense theatrics, and it is his powerful performance that somewhat redeems the movie. Even though it's nearly a decade since the last Sarkar movie came out, Amitabh Bachchan has not forsaken the nuances of his character. While he can still rattle off dialogues like a boss, it's in the quieter scenes, like when Amit Sadh places his hand on Sarkar's, is where Amitabh shines best. The rest of the positives about the movie trail far behind his performance. If I had to still nitpick about his acting, it would be that, unlike the first movie, here he struggles with Marathi. The Ganapati visarjan scene is well-done, especially Big B's rendition of the Aarthi, and also the shootout thereafter. However, the best sequence in the movie (just two to note) happens in the climax, with the final twist nearly saving the movie. The whole interaction between Sarkar and Walia is deftly handled and the lack of background score (a blessing, something which I will discuss in the next section) just adds to the tension. This entire scene shows some vestiges of RGV's sadly lost brilliance. Unfortunately, it's too late to save the movie by then…

If you are making a serious movie, and people are laughing at it, you should know something has gone wrong. That's the unfortunate case with Sarkar 3. The threequel is not even a patch to the original Sarkar and its slightly disappointing sequel. Primary blame should go to Ramu and his writers. First of all, a major portion of the movie follows the same pattern as the original - a deal gone wrong, a politician getting killed, treacherous aides and a strong climax. Secondly, the writers have no clue about Mumbai and how things have changed here. It's not the '90s anymore; we do not have politicians with personal machine gun carrying henchmen or public shootouts happening in broad daylight. The police force is invisible, and it is shown that you can easily carry a gun into a Metro train. So yeah, the writing is choppy and the dialogues are super clunky, especially the ones written for Jackie Shroff. If these two are not done right, then there is no point in making a political thriller. The editing is patchy, with random scenes following each other. There is a major scene, where an important character gets killed mid-way, but apart from a newsbreak, there is no follow-up to this scene. Once again, RGV allows his cinematographer to go haywire, making this look like some student is attempting to impress his mentor with his camera-work. The background score is an ear-sore, with the popular Govinda Govinda theme sounding like it has been remixed by Badshah.

Coming back to the rest of the actors, only Manoj Bajpayee (in a criminally brief role, the movie needed more of him) and Ronit Roy are okay. Amit Sadh tries hard, but the movie only allows him to grunt, snarl, look angry, and at one hilarious point, even ape Big B. No need to mention that he is finding it seriously difficult to fill in the big boots left by Abhishek. Yami Gautam just glowers and glowers, while Rohini Hattangadi disappears mid-way with no reference to her character later. However, it is Jackie Shroff, who delivers the worst performance of the lot. Blame it on the writing or the direction, but it was embarrassing to see him roll around with a half-naked girl and pout dialogues like, 'Ladoo ka bada problem yeh hai ki woh bahut meethi hai.' Profound, indeed!

No two words about this...Sarkar 3 is a huge letdown for those who expected RGV to make a major comeback here. If only the maverick director had spent less time trolling Tiger Shroff and Vidyut Jammwal and instead focused on his craft, perhaps the trilogy could have been given a fitting farewell. Forget being The Godfather 3, Sarkar 3 ends up as The Hangover 3 of its Godfather-inspired franchise. Save for Amitabh Bachchan's dependable performance and the final twist, Sarkar 3 is avoidable!