Secret Superstar is an important film that needs to be watched not just for the message, but also because it is entertaining and has one of the best performances of the year by Zaira Wasim. 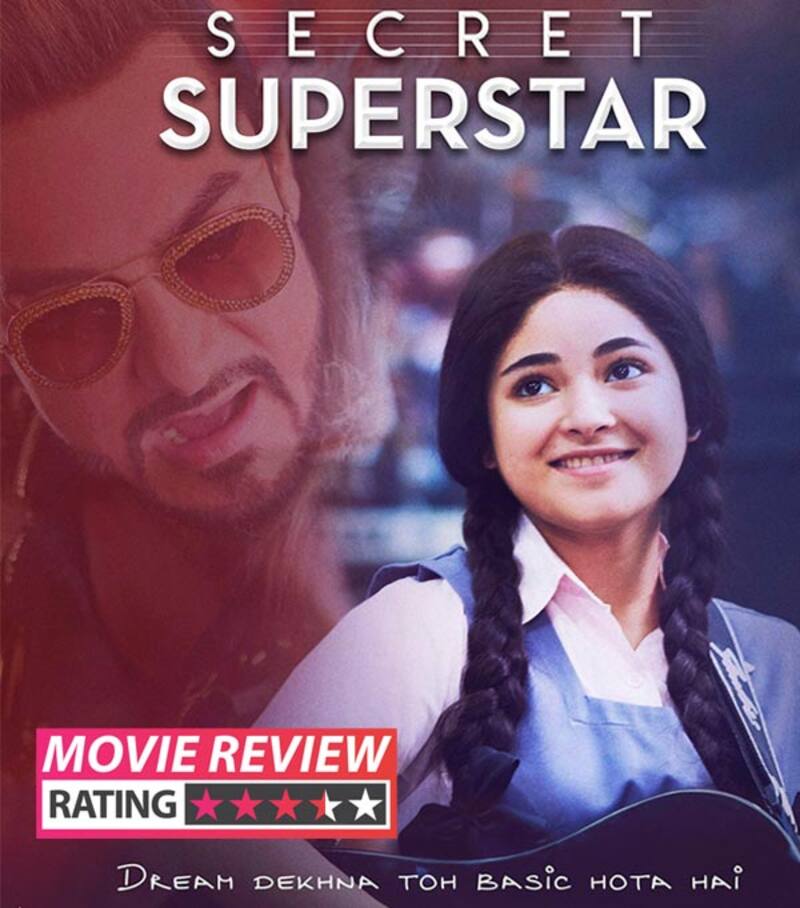 After giving us Bollywood's biggest blockbuster last year in Dangal, Aamir Khan returns with his latest movie, Secret Superstar. However, this time he is not the lead; instead it is the supremely talented Zaira Wasim who has taken on the mantle. Aamir Khan, in an extended cameo, made a lot of waves with his character of Shakti Kumar, an egoistic music director. Secret Superstar is directed by Advait Chandan. Here's our review, Also Read - Dussehra 2022: Before Adipurush releases, check out how Shah Rukh Khan, Salman Khan, Akshay Kumar and more celebrated Raavan Dahan in THESE movies

Secret Superstar despite its aspirational hues and overtones is a grim film that leaves you angry and disturbed. While the core of the film deals with the story of a young girl Insiya (Zaira Wasim) wanting to make her dreams come true, Advait Chandan's film throws light on domestic violence and its impact on children. Insiya's mother (Meher Vij) is a helpless bystander of her husband's (Raj Arjun) abusive ways. Caught between her daughter's dreams of becoming a singer and bound by the norms of a conservative Muslim family, she is unable to muster the courage to break free. Aamir Khan plays a narcissistic, loud, obnoxious music composer, Shakti Kumaar, who is quite a caricature. Shakti plays an important role in taking the story ahead and bringing out the best and worst in these characters. Neither preachy nor too heavy on the subtext, Secret Superstar is an important film that needs to be watched for its message that everyone has a right to dream. Also Read - Ira Khan flaunts her engagement ring in a new mushy video with fiance Nupur Shikhare [Watch]

Zaira Wasim as Insiya is spot on. She is the star of the film and takes to the role with hunger. There isn't a single moment or scene in the film where Zaira feels out of sync with her character. When she argues with her mom that the right to have a dream is the most basic human emotion, there is ample conviction in her reasoning. You feel for Zaira when she throws on a burkha to hide her identity because even singing a song is an offence for her dad. Music is an important part of Secret Superstar and the songs do a great job of conveying the right emotion and taking the story ahead. Aamir Khan, as the over the top music composer, Shakti Kumaar, is quite a riot. His self obsessive one-liners and flirtatious encounters with the fairer sex will leave you in splits. The narrative of the film is also one of the major highlights. Secret Superstar makes a valid point, that dreams can be crushed and life can be lived within the four walls of a confined house, but if the spirit refuses to succumb to the pressure then being a rebel is not that tough. Meher Vij as Insiya's mother is a delight to watch. Her scenes with Zaira in the second half and especially the climax are major highlights of the film.

Where Secret Superstar lacks is pace and the first half spends a lot of time in creating scenes and moments that seem indulgent. Despite the setting being a Muslim family, the story of Secret Superstar has a universal appeal. Being conservative is not an isolated trait that is reserved for one community but that sentiment doesn't come across that strong in the film. Zaira's track with her school friend had scope to flower into something more than the expected, but the script fails to take off in that direction.

Secret Superstar is an important film that needs to be watched not just for the message, but also because it is entertaining and has one of the best performances of the year by Zaira Wasim.