While 2016 has already ended, the awards season for the year has just begun. While a few awards shows have already taken place, a couple of them will take place over the next few weeks. BollywoodLife at the end of 2016 conducted several polls and asked you to vote for your favourites. One such category was the Best Actor one. Let me tell you that we have saw quite a few power packed performances last year, especially from Salman Khan, Shah Rukh Khan, Akshay Kumar, Shahid Kapoor, Amitabh Bachchan and Sushant Singh Rajput. But who was the Best Actor of 2016 according to you? Well, we got to tell you that we got a huge response for all of you and throughout the last month, the stars have been interchanging their positions in the poll. However, we finally have a result. Out of the six nominees we had given, fans chose Shah Rukh Khan as the Best Actor of 2016! Also Read - Trending Entertainment News Today – Abhijeet Bhattacharya says Akshay Kumar was ‘Gareebo Ka Mithun Chakraborty’; Neena Gupta reveals Subhash Ghai asked her to wear a 'heavily padded bra' for Choli Ke Peeche song 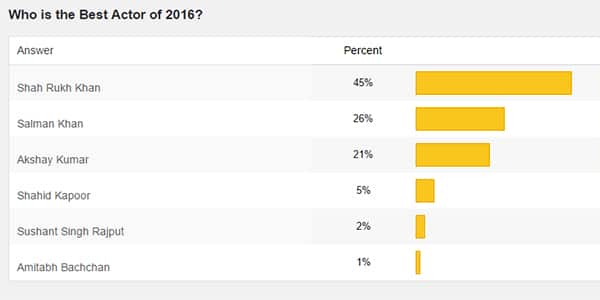 Shah Rukh Khan gave us some stunning performances through Fan and Dear Zindagi last year. Yes, they weren't huge hits like Dangal or Sultan, but Shah Rukh's performances in both the films were really good. In fact, Fan was one of his most difficult films and in Dear Zindagi, he was too good. ALSO READ - 5 box office lessons Salman Khan, Shah Rukh Khan and Alia Bhatt taught Bollywood in 2016

We congratulate Shah Rukh Khan on being awarded our Best of Actor of 2016 by fans! However, we need to give a round of applause to Salman, Akshay, Amitabh, Shahid and Sushant too. They also gave us some really intense performances in 2016.