Shah Rukh Khan created a doodle in Paris 20 years ago; it'll now be sold for around Rs 2 lakh

Who knew Shah Rukh Khan excels in doodling as well...

There is never been a superstar more charismatic than Shah Rukh Khan in Bollywood. He's not called King Khan for nothing. He is a man of many talents and recently one of his unmatchable talent came into the limelight and that talent is the art of doodling. According to a report by Mid-Day, Shah Rukh Khan, in 1997, on a trip to Paris created this doodle. The doodle is basically Shah Rukh Khan's idea of France. He has created the Bastille, the Concorde, Voltaire, the French Revolution, the French connection, King Kong climbing the Eiffel Tower with the damsel in distress, a pair of lips to denote French kissing and French General Charles de Gaulle. While doing do he added a little Bollywood touch to it with a Govinda-Karisma Kapoor track, 'Tu Mera Hero No 1' and a King Kong climbing up the Eiffel Tower with a damsel in distress screaming, 'Bhagwan ke liye mujhe chhod do.' He signed off with, 'In Paris, do as the Indians do.' Also read: Spider-Man's tribute to Shah Rukh Khan will drive away your Monday blues - Watch video Also Read - Shah Rukh Khan raises our hopes for his OTT debut with new video; Salman Khan goes 'Swagat nahi karoge' – watch

It is reported that the sketch is a part of film journalist-critics collection and is slated for Rs 1.2 lakh to Rs 1.8 lakh. Also Read - TOP Bollywood celebs who have failed to fight off their odd BAD habits 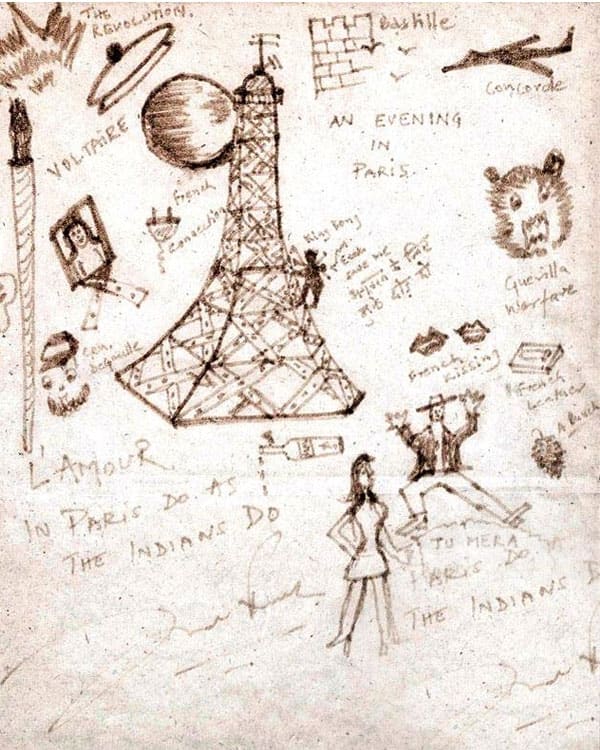 Osian founder-chairman Neville Tuli told mid-day, "The rare sketch is more like a doodle-cum-drawing of Shah Rukh's visit to Paris. It provides a unique insight into the mind of a cinematic superstar in the making. Though estimated conservatively between Rs 1.2 lakh to R1.80 lakh, it is expected to sell for more." Also read: This is what Shah Rukh Khan will be doing on the release day of Salman Khan's Tubelight

He further added, "With several cinematic personalities increasingly trying to discover other facets to their creativity, especially with the fine visual arts, we are expecting to widen this section in the next auction."