Shah Rukh Khan, Gauri Khan use an umbrella to avoid getting clicked at a private airport, fans ask, 'Why are they hiding?'

Shah Rukh Khan made a public appearance at Baba Siddique's Iftar bash recently and he looked disinterested in getting clicked by the shutterbugs. SRK has been avoiding getting clicked by the paparazzi after his son Aryan Khan's jail incident. And many of his fans call it valid behaviour. Today also the superstar was spotted at the private airport along with his wife Gauri Kahn and his guards covered them with an umbrella as they were avoiding to get clicked. We wonder if this is a silent protest by Shah Rukh Khan. While some SRK fans are highly concerned about this behaviour. Many are questioning if something is wrong and many are justifying SRK's this act. Also Read - Shah Rukh Khan, Salman Khan, Madhuri Dixit’s selfie from Karan Johar’s bash breaks the internet; ‘All legends in one frame,’ say fans

One user on the post of a celebrity photographer wrote, " Yarrr whtssss this... Why are they hiding... I'm not liking this behaviour... somebody tell us whts happening... Is everything ok ", and even tagged his manager Pooja Dadlani on this comment. While another user wrote, " Woh log muh chupaate fir bhi tum besharam log unke piche piche ghumte ho". One of King Khan;s die-hard fa justified this act of him and called the media toxic, " After all that media thing which happened with Aryan k this is absolutely acceptable.....media is toxic af" One more SRK fan commented, " If they don't want to be photographed why do you bother? Just understand the memo and let them be. Basic decency shouldn't have to be taught." Also Read - Ranveer Singh-Deepika Padukone, Ranbir Kapoor-Alia Bhatt and more: Enormous net worth of these 9 celeb couples will make you question your bank balance 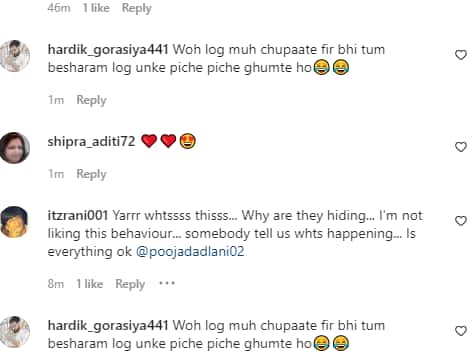 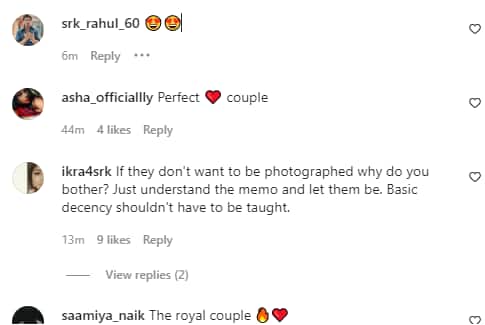