Apart from shooting for Dilwale in Hyderabad, King Khan has been busy catching up with his Tollywood counterparts

Hyderabad has been buzzing with Dilwale mania ever since Shah Rukh Khan, Varun Dhawan and Kriti Sanon arrived in the city to shoot for Rohit Shetty's film. Also Read - Mahesh Babu's Brahmotsavam, Pawan Kalyan's Sardar Gabbar Singh - South movies of 2016 that were a huge let down

While the Dilwale team has been extremely busy shooting, Shah Rukh and Varun had took some time off to meet some renowned celebs from Telugu film industry. After charming everyone at superstar Mahesh Babu's Brahmotsavam film set, Shah Rukh Khan walked into the sets of Ram Charan's Bruce Lee, much to the surprise of everyone present there. Ram Charan was completely starstruck by King Khan's unexpected visit. Sharing his few pics with Shah Rukh on Facebook, Ram Charan wrote," Superb surprise !! ‪#‎Shahrukhkhan‬!! on last day of ‪#‎BruceleeTheFighter‬shoot.Girls on the sets went crazy.He saw parts of Bruce Lee title song and loved it !! " Also Read - Mahesh Babu teams up with Oopiri director Vamshi for his next! 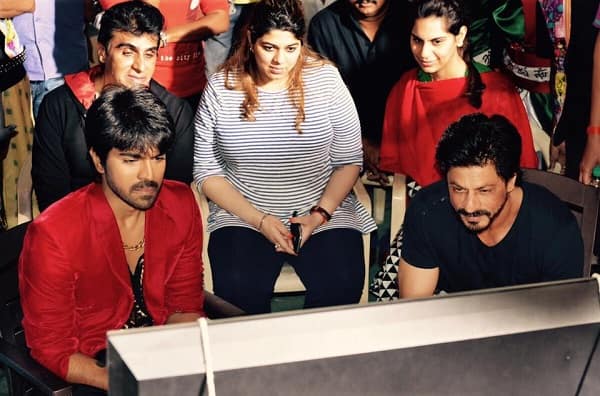 Also Read - Mahesh Babu proves that he is the king of Tollywood as he bags his third SIIMA award!

The Bollywood superstar interacted with Ram Charan and his Bruce Lee team, and even praised the title track of the film! Just few days back, Varun Dhawan had thanked Ram Charan on Twitter for his biriyani treat. And now with SRK coming to meet him, Ram Charan sure has great relations with Bollywood stars. With Chiranjeevi's much anticipated cameo and now SRK's surprise visit to the sets of the film, Bruce Lee certainly seems like an extremely special film for Ram Charan.