Shah Rukh Khan will rule at the box office in 2016, not Salman Khan: Fans verdict! 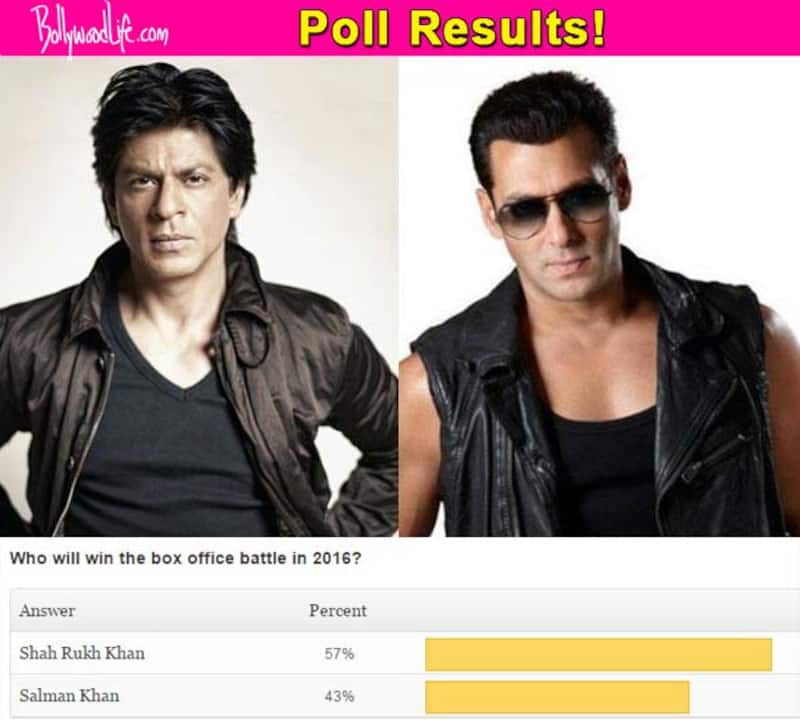 These two superstars are likely to lock horns next year and therefore we asked you'll to vote and tells us - who according to you will create hungama at the box office? Well, the verdict is in and King Khan has won this poll...

Both Shah Rukh Khan and Salman Khan have two releases this year. However, they won't be clashing at the box office. But in 2016, King Khan and Being Human star may very much battle it out at the BO. We say so because the makers of SRK's Raees are eyeing to release their film during Eid next year and so are the makers of Salman starrer Sultan. So if these two films indeed come out together then I am pretty sure this Clash of the Titans would turn out to be EPIC. And that's the reason why we conducted a poll recently on our website asking you'll to vote and tell us - who will rule at the box office in 2016? Well, by bagging 57 percent of the votes, Gauri Khan's hubby dearest raced ahead and won the survey. As for the Prem Ratan Dhan Payo hero, well, he received 43 percent of the votes. Also Read - Aishwarya Rai Bachchan refused to join Ponniyin Selvan team on The Kapil Sharma Show because of Salman Khan? Here's the truth

Yes, King Khan has won the poll by a big margin so kudos to all those who voted for him. Let's hope he does get cash registers jingling in next year. Also Read - Ranveer Singh-Deepika Padukone, Aishwarya Rai Bachchan-Abhishek; when distasteful separation rumours of Bollywood's loved couples grabbed eyeballs

While the makers of Raees and Sultan are yet to announce the release date of their films, one thing is pretty sure - if the Shah Rukh-Salman clash happens then its certainly going to be highlight of 2016. After all, there is a reason why the term 'ruling Khans of Bollywood' has been coined, hai na? Also Read - Rashmika Mandanna makes Salman Khan groove to Pushpa song Sami; fans want them in a film together [Watch Video]