Shahid Kapoor as Maharawal Ratan Singh from Padmavati has been declared the most fiercest warrior by fans!

When an actor gets into warrior mode, it's time for gruesome yet awesome action. To see them swipe off half a battalion with one swish of the sword gives fans a high. Only recently, Sanjay Leela Bhansali's Padmavati gave us a new warrior in the form of Shahid Kapoor. The actor plays MahaRawal Ratan Singh in his upcoming magnum opus, Padmavati. The trailer had us gushing over his royal look as Shahid Kapoor pulled off the avatar with the grace and eloquence of a true warrior. Considering we have had so many actors play warriors before, Bollywoodlife decided to conduct a poll to ask our readers as to who, according to them, was the fiercest warrior? Also Read: Padmavati trailer: 5 unbelievably brilliant moments of Deepika Padukone, Shahid Kapoor, Ranveer Singh that left us awe-struck Also Read - Khatron Ke Khiladi 11, July 25, 2021 highlights: Arjun Bijlani beats Vishal Aditya Singh; gets the K-medal

Prabhas as Baahubali, Shah Rukh Khan as Asoka, Salman Khan in Veer, Ranveer Singh as Peshwa Bajirao, Hrithik Roshan as Akbar, Sushant Singh Rajput out as Jilaan were the contenders. We now have the results. Guess who won? Shahid Kapoor as Maharawal Ratan Singh! He received 34 per cent votes, followed by Prabhas ,who received 30 per cent votes. Ranveer Singh, as Peshwa Bajirao, and Shah Rukh Khan as Asoka, took the 3rd and 4th place with 18 per cent and 10 per cent respectively. Shahid Kapoor, as the readers have decided, is indeed the fiercest warrior as he BEATS Prabhas, Shah Rukh Khan, Salman Khan and Ranveer Singh. Also Read - From Shah Rukh Khan to Shilpa Shetty Kundra: 8 Bollywood actors who have successful side businesses 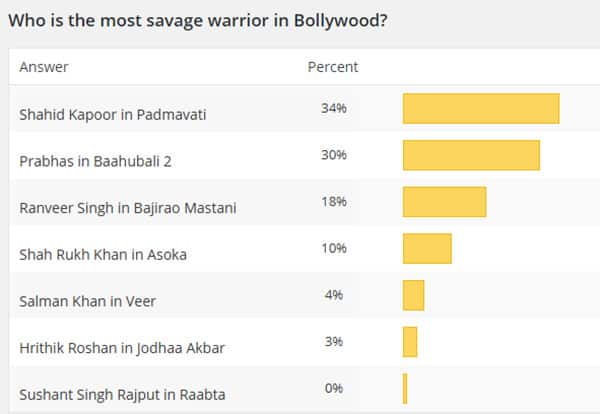 Considering he's playing a royal character for the first time, fans are super excited! It has created a sense of intrigue for everyone. Shahid has always been known to pull off different avatars but this is a first even for him. MahaRawal Ratan Singh was a Rajput ruler - the husband of Rani Padmini played by Deepika Padukone in the film. The movie also stars Ranveer Singh as Alauddin Khilji. The movie is set to release on December 1.

In a recent Twitter chat, Shahid Kapoor revealed that it was a pleasure and privilege to work with Sanjay Leela Bhansali. The actor also admitted that he liked the fact that MahaRawal Ratan Singh was courageous, fearless and respectful towards women.