Shahid Kapoor on Mira's request to paparazzi to leave Misha alone: She has a right to express her feelings as a mother

Shahid Kapoor reveals what he feels about Mira's reaction to media attention on Misha.

Mira Rajput had very recently requested the paparazzi to let her kid Misha enjoy her childhood and not get hounded by press. She had written on her Instastory, “Guys please be kind. Let kids enjoy their childhood and leave the photographing to the parents.” So when Bollywoodlife met up with Shahid Kapoor to know what he feels about this request, he said, "She was at a park and so many pictures happened, so I think her point was very valid. She just said that that is a place where kids should be able to be kids. I think that was a very fair point and she said it politely and nicely. It was like point to be noted my Lord types. She would not get aggressive. She has a right to express her feelings as a mother just like any other mother."

Shahid Kapoor: I think everybody needs to lose their ego and their selfish personal motives

Also Read - From swanky apartments to expensive cars: Shahid Kapoor and wife Mira Rajput's net worth and most expensive possessions will blow your mind 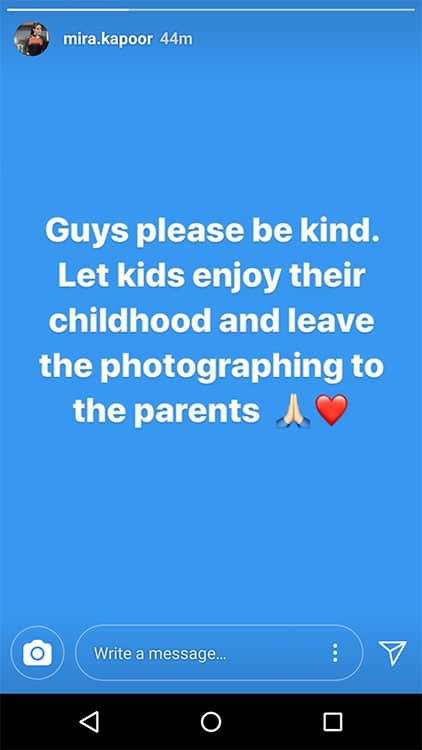 Mira has a lot of influence on Shahid. The actor said yes to Padmaavat because of her. In our exclusive chat with the actor revealed, "She essentially said, ‘I just feel he is a great filmmaker and you are an actor, who needs to be put on a certain platform. You have done work which has been loved and liked but you have not done that work on that canvas and on that scale.’ She said, ‘This will be a beginning for you to put yourself on a certain platform where people will see you in a certain light and in a film of a certain scale.’ She constantly kept saying, ‘Shahid, you should do that and that’s the only thing that hasn’t happened to you yet. You need to be a part of a film of this size and scale and you need to be seen as an actor who can pull off a character like this. You have to take the challenge.’ She was very optimistic and supportive." Also Read - Shahid Kapoor’s wifey Mira Rajput is a BTS fan and we got proof