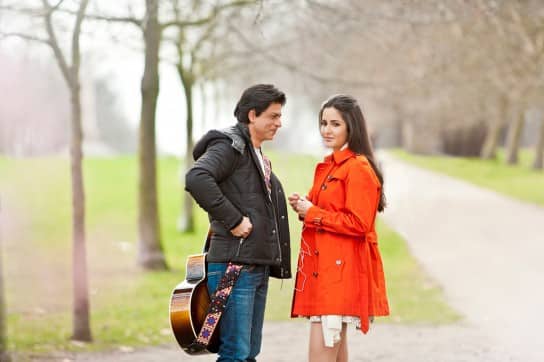 Why is Anushka Sharma missing?

It's out! The much-anticipated first look of Yash Chopra’s next directorial venture was released yesterday (March 3). The as-yet-untitled film stars the baadshah of romance Shahrukh Khan with Katrina Kaif and Anushka Sharma. Shooting first began with a song in Kashmir and then the unit moved to London for the second schedule which started on February 22, 2012. However, the first look has only SRK and Kat in it. The two are said to be on location in London in the still. We know Anushka is shooting there too, and the buzz is that the film is a love triangle. So we were quite surprised that Anushka was not a part of the first look. Does this mean that she has just a supporting role? Or do the Chopras believe that SRK and Kat's unseen chemistry is more interesting for the film's potential viewers than Shahrukh and Anushka's since everyone has already watched them in Rab Ne Bana Di Jodi? Hopefully, we will know for sure before the movie releases this Diwali. Also Read - Unseen pictures of Anushka Sharma and Virat Kohli’s Rs 34 crore plush abode gives a glimpse into their extravagant lifestyle – view pics

Honestly, the still didn't excite us much. It is not telling us anything new. It seems as if Shahrukh is once again trying to charm his way to her heart, while Kat is once again doing her coy act. What we can't wait for is the film's music. Yash Chopra's films always have great music, and this time he's got AR Rahman and Gulzar on board. The album is definitely going to be magical. Don't you think so? Did you like the still? Tell us! Also Read - WTF Wednesday: ‘Are you pregnant?’ Dear fans, stop asking women in Bollywood and TV this cliché question