The Bhansali film will release on March 13

Shah Rukh Khan is currently shooting for Maneesh Sharma's Fan. After which, he's said to begin shooting for Rahul Dholakia's Raees, that recently confirmed its release date for Eid 2016. However, there's another big news to celebrate. SRK's 2002 blockbuster, Devdas is making a grand release in Pakistan this month. Yes. The Sanjay Leela Bhansali film is hitting the screens in Karachi on March 13. And we hear that his Pakistani fans have gone all out to make this release a blockbuster hit. Also Read - BollywoodLife Film Awards 2015: Varun Dhawan, Shahid Kapoor, Arjun Kapoor nominated in the Selfie King category!

A popular SRK fan club in Pak has given out an open invite to all his fans, asking them to be a part of a special fan meet on the release date, i.e March 13. The intention is basically to gather most number of people and drive a massive wave on the release day. The Fan actor has a humongous fan base across the border which I am sure is going to work big time for the release of Devdas. Here's the invite put up by the fan club: Also Read - Did Katrina Kaif just call Deepika Padukone 'attention seeking' ? 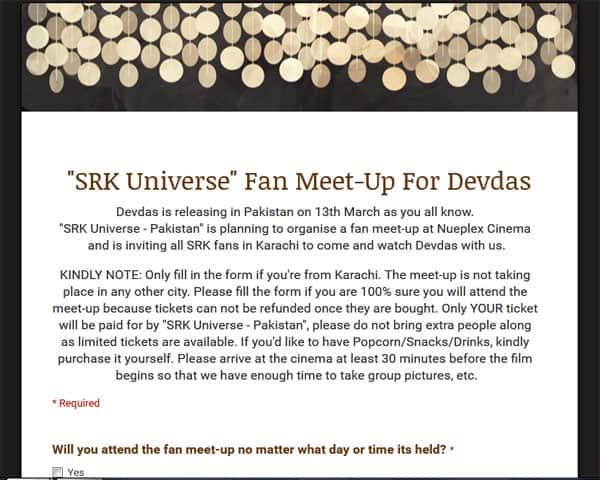 From what we know, Nueplex Cinemas Karachi has already begun its advance bookings. This is again the same venue where the fan meet is scheduled to happen. Let's see how big does this get over time.

Apart from SRK, Devdas also features a starry cast of Aishwarya Rai Bachchan, Madhuri Dixit and Jackie Shroff. Watch out this space for latest updates on the film's release in Pakistan!