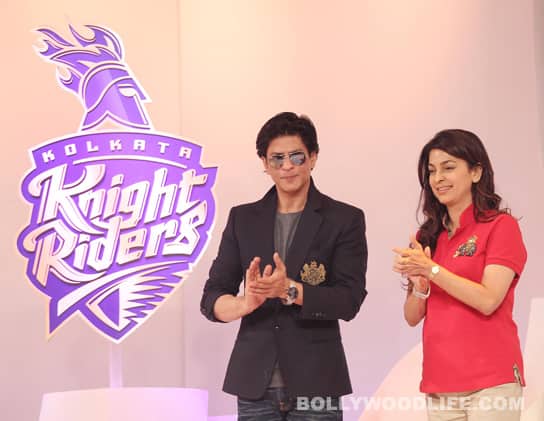 The superstitious baadshah, says that he will change the KKR colours to pink if the team doesn’t perform well this year

Last evening Shahrukh Khan, Juhi Chawla, Jay Mehta and CEO of Kolkata Knight Riders, Venky Mysore unveiled the latest look of KKR. SRK clarified why he changed to purple a couple of years ago. “The golden colour was because I like gold and the black has been changed because I was told that it was not lucky. And since we couldn't make it to the last four I can't even argue with it.” While SRK is currently happy with purple and hopes that the team will perform better this year, he is dreading that he might soon have to change the purple to pink, if his partner Juhi Chawla has her way.

When the owners of KKR were deciding what colour to go for after the black outfit didn’t manage to bring them luck, Juhi was actually vouching for pink! But the thought of seeing Yusuf Pathan in the bubbly colour made everyone flinch and refrain from it. Although, not wanting to break dear friend’s heart, SRK did promise to consider her input. “That suggestion may follow if you (KKR) don't win the finals this year,” he told his players.

The two friends did seem to be having a lot of fun. Especially, when Juhi spoke about how pleasantly surprised she was when the King Khan actually made it to the event on time. “They told me that the conference was going to start at five and I was like there's no way that SRK is going to be on time. So that's why I came late and then I heard that he was here at 4.30!”

Turns out, SRK had mistaken Dawn to be Don. He said, “They said that the new tagline is New Dawn and New Knights, so I thought they were planning to promote my movie (Don) again." Ah! So that explains the punctuality, no? Wink, wink.

But the story of this event doesn’t end right there. Seeing Juhi and SRK on the same platform after a long time, people just couldn’t help wondering if the two are still as close as they used to be. “There is so much tabloidism related to the work that we do. The unfortunate bit is that some piece is written and people who write it start believing it. And then to come back and ask us about something that does not exist is little odd and embarrassing for us to answer because it does not exist in the first place. When you ask us this we get a little awkward,” he said. Point taken, Mr Khan!