In his recent Twitter rant, Abhijeet called many names to Karan Johar and Mahesh Bhatt for giving them opportunities.

Uri attack on soldiers by four armed militants led to international outrage. 18 soldiers were killed in the mishap along with the four terrorists. This has left the whole country deeply hurt. People are now busy thinking of options that PM Modi can look into regarding sending Pakistan a strong message. While everyone is screaming war on Pakistan, there are some who are still stuck on throwing Pakistani artistes out of India. One such person is Abhijeet Bhattacharya, the singer whose voice was much sweeter than the tweets he posts. In his recent Twitter rant, Abhijeet called many names to Karan Johar and Mahesh Bhatt for giving them opportunities. Also Read - Liger: Vijay Deverakonda and Ananya Panday bid farewell to Mike Tyson as they wrap up the shoot – view pics

Eversince the attacks happened, Abhijeet continued to put up tweets. First he began with respecting the soldiers and then resorted to name calling anyone who said something he didn't like. Let us tell you how. Also Read - Rocky Aur Rani Ki Prem Kahani: Karan Johar's Ranveer Singh, Alia Bhatt, Dharmendra starrer locks a Valentine's Day RELEASE DATE – watch video

Also read: Sonam Kapoor called Abhijeet a hypocrite and this is what happened next! Also Read - Katrina Kaif-Vicky Kaushal wedding: These 3 Bollywood A-listers CONFIRMED as guests after director Shashank Khaitan

Then he retweeted a few tweets which were equally insinuating. 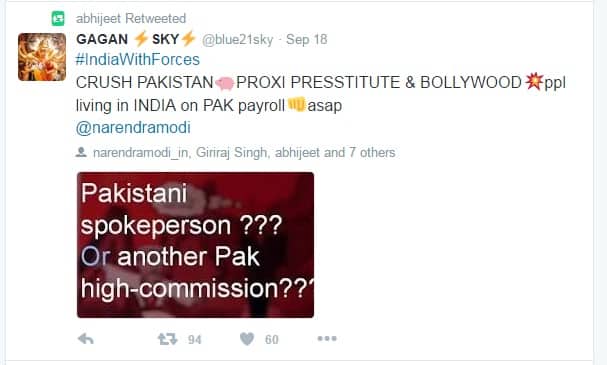 He continued to putting up more such provocative stuff until he directed his rage on Karan Johar and Mahesh Bhatt. As you all know, Fawad Khan is an integral part of Dharma Productions now with everyone going gaga over his looks and performance. In fact, he has become so popular here that there are reports that actresses would do anything to work with him. He is becoming a big deal. Also, Mahesh Bhatt's Vishesh Films has given singing opportunities to a lot of Pakistani sings and thus Abhijeet has directed all his hate towards them in his latest tweets. Check them out 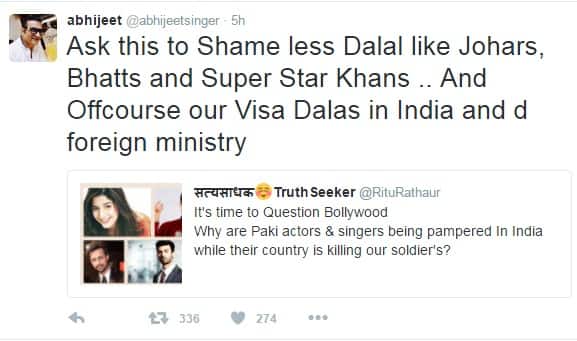 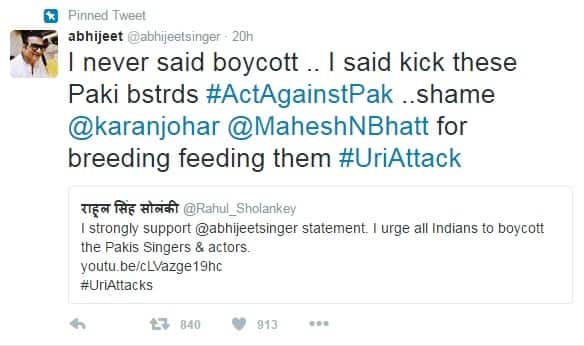 Now it's nothing new for him to get so much attention by saying such outrageous stuff on Twitter. Only recently, PTI had reported that an FIR was registered against Bollywood singer Abhijeet Bhattacharya on charges of public obscenity and outraging modesty of a woman, after AAP leader Preeti Sharma Menon filed a complaint at the Cyber Cell. In her complaint, Ms Menon had tweeted to the Mumbai Police Commissioner about Mr Bhattacharya’s use of “obscene” language on social media towards a woman journalist. However, the singer responded to her tweet with indecent language, Ms Menon said. He was then arrested and later released on bail for his derogatory tweet.

So it's yet another rant from Abhijeet which can be easily ignored.