Shershaah: Sidharth Malhotra is almost unrecognizable as he poses with the Gorkha regiment in Palampur - view pic

Shershaah: Sidharth Malhotra looks so young and fresh in this pic from the shoot in Palampur, Himachal Pradesh which is the hometown of late Captain Vikram Batra 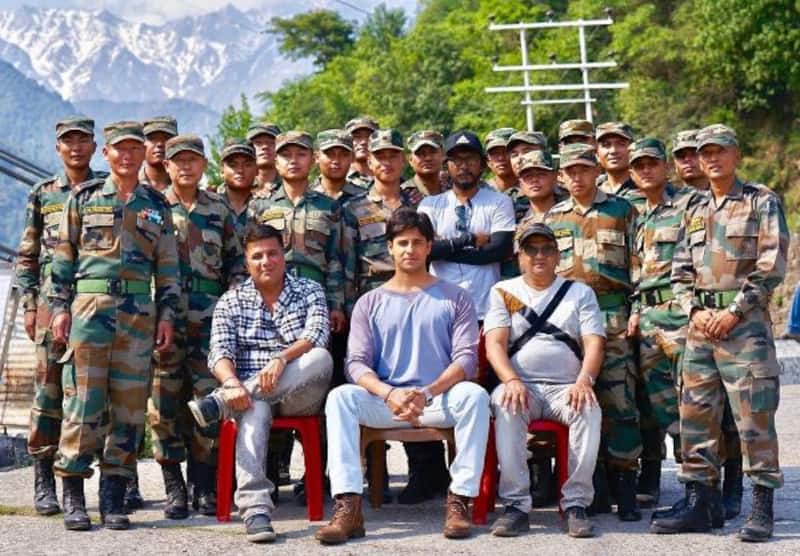 Sidharth Malhotra and the team of Shershaah had recently flown down to Chandigarh for the first schedule of the film. Today, a picture has been shared by writer Shabbir Boxwala where we can see the handsome hunk posing with members of the Gorkha Rifles in Palampur. The lovely town of Palampur in Himachal Pradesh is home to tea gardens and a huge army camp. Sidharth Malhotra shot for a part of the film there. Shershaah is a biopic on the life of Kargil hero, Captain Vikram Batra. He was nicknamed as Shershaah, The Lion King by the Pakistan Army. He was the recipient of the Param Vir Chakra, the highest award for bravery and valour. Sidharth looks so young in the picture. We can also see filmmaker Vishnu Vardhan.

John Abraham's Satyameva Jayate 2 marks the return of THIS actress

Check out the pic here

Actress Kiara Advani who is part of the film had also accompanied Sidharth for the Chandigarh schedule. She put up a post a few days back where she wrote that it was a pleasure working with her rumoured boyfriend but legit friend, Sidharth Malhotra. The picture was a candid one. Sidharth after wrapping up the shoot of Marjaavan went off to the Maldives for a short and relaxing getaway. Then, he began prep for Shershaah. Also Read - Trending Entertainment News Today: Did Varun Dhawan confirm Prabhas-Kriti Sanon's affair, Aryan Khan and Ananya Panday spotted together and more

In an interview to Mid-Day Sidharth has spoken about how weapons always fascinated him. He has worked as an army officer before in Neeraj Pandey's Aiyaary. However, the film had tanked badly. Given the love showered on war films like Uri: The Surgical Strike (2019) and Kesari (2019), we have to see if the audience loves Shershaah as well. The film's music is by Yuvan Shankar Raja. Captain Vikram Batra hailed from Palampur so it is possible that the adolescent journey of the war hero is being shot there. Stay tuned to BollywoodLife for more scoops and updates! Also Read - Kartik Aaryan has an epic reply when called 'a replacement star'; it'll win non-fans over