Ajay Devgn's Shivaay trailer has totally stunned everyone around and after touching the 25 million mark, the makers released a fierce new poster...

The latest poster was released to celebrate the huge feat that the film's trailer achieved...

Ajay Devgn's Shivaay has created a lot of buzz much before its release. The film's posters and the gritty trailer have been loved by one and all. In fact, after the trailer was released, it became so popular that it has already broken a few records. Shivaay's trailer was the very first Bollywood trailer to have crossed 12 million view in less than 3 days (views of YouTube and Facebook). And as of yesterday, the trailer has set an unprecedented benchmark of 25 Million+ views, when you combine the views on YouTube, Facebook and Hotstar. Also Read - 5 times Shah Rukh Khan charmed us with his surprising cameos in these Bollywood films

Shivaay has even got 7 lakhs likes for the trailer till now, again a huge number. This viewer engagement proves that everyone is on the edge of their seat to watch the film! And I have to say that we are super excited for the film too! But to celebrate this incredible feat the makers released another poster thanking everyone for appreciating the trailer. We see Ajay and Abigail (Eames) in this latest poster and it intrigues us further. Ajay's fierce look totally makes us wish Diwali was near! Just imagine, if such is the power of Shivaay (that one trailer has set so many records), imagine what the entire film can do! Also Read - Red lips, wet hair: Throwback to when Aishwarya Rai Bachchan turned into a seductress and wooed five men

ALSO READ - 5 reasons why Ajay Devgn's Shivaay should not be worried of clashing with Ranbir Kapoor and Anushka Sharma's Ae Dil Hai Mushkil! Also Read - Karan Johar to announce his next directorial venture with Ranveer Singh and Alia Bhatt tomorrow? This video suggests so

However, Ranbir Kapoor and Anushka Sharma's Ae Dil Hai Mushkil might try to thwart Ajay Devgn's plans as these two films clash on Diwali this year! Anyway, check out the new Shivaay poster right here and tell us what you think about it in the comments section below! 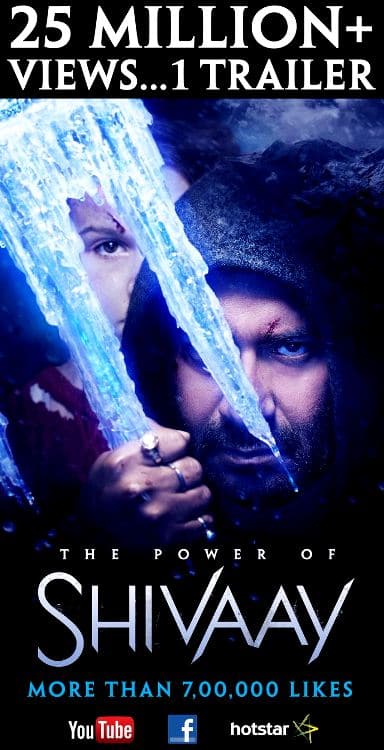