It's sad to see Ashutosh and Jimmy give their best in a film that is totally undeserving of their skills. 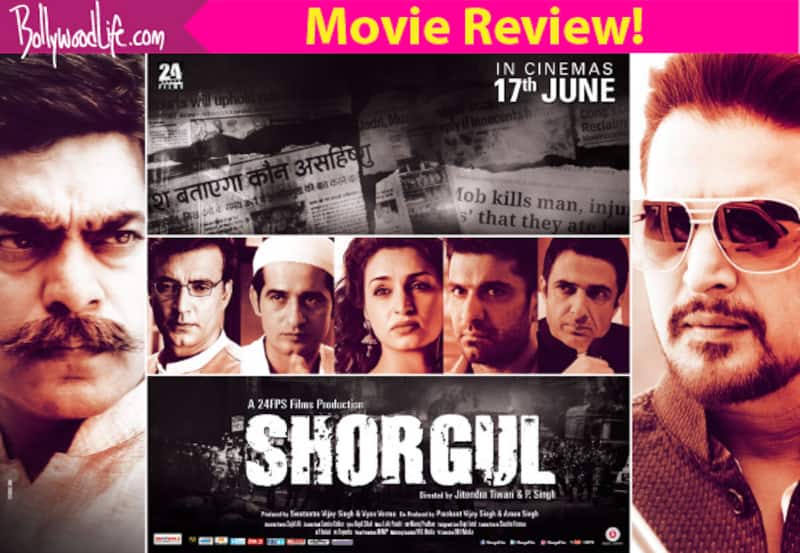 If I say this is one of the worst films of the year, that would be an understatement.

Just when we are yet to get over the hangover of a progressive film like Udta Punjab, comes a film that takes us straight back to the '90s. Shorgul is a political drama that stars Jimmy Sheirgill, Ashutosh Rana, newcomer Suha Gezen and television stars Eijaz Khan, Hiten Tejwani and Aniruddh Dave. Also Read - From Karan Kundrra to Bigg Boss' Paras Chhabra: Top TV stars who were accused of cheating on their partners

Here's my review of the film, or whatever it was supposed to be.... Also Read - After Sidharth Shukla and Shehnaaz Gill, these couples played on love angle on Bigg Boss and other reality shows to become famous

The film starts with a scene where a man whose face is hidden in shawl delivers a gun to a girl. Then suddenly an item song appears out of nowhere, where Hrishita Bhatt praises the quality of air, before the film switches back to the first girl. Got the idea? This is how haphazard this political drama is!

Anyways the plot is about how the friendship between a Hindu boy (Aniruddh Dave) and a Muslim girl, is used by political leaders (Jimmy Sheirgill and Narendra Jha) to fan a religious war. We get to hear dialogues that we last heard in Nana Patekar's Krantiveer, characters get killed more than an entire Game of Thrones season and Sanjay Suri randomly pops up to intentionally whitewash a certain UP CM. In case you are not sure which CM I am referring to, Suri's character's name is Mithilesh.

The only credit I can give to the makers is how they deceived talented actors like Jimmy Sheirgill, Ashutosh Rana, Narendra Jha and Sanjay Suri into acting in this mess. It's sad to see Ashutosh and Jimmy give their best in a film that is totally undeserving of their skills.

The makers of this film seems to have got stuck in a timewarp - they never seem to have left the '90s. Sure, the Hindu-Muslim rivalry is a burning issue that still persists in the current times. But the treatment of the subject is as old as the times as the rivalry had begun. There is the usual jingoistic dialogues, very bad junior artistes who often look at the camera and lots of fiery dialogues. Except instead of the usual suspects like Govind Namdeo and Raza Murad, we have actors like Jimmy Sheirgill and Narendra Jha in villains' roles.

The direction is totally amateurish. All the director does is give the actor a dialogue, capture his speech, and then capture the listener's expression (that too, for some reason, in slow motion). Some scenes are so laughable that you will be shocked that how the film even got a release. For example, an important character is shown getting killed with an iron rod pierced into his stomach, yet the guy shows no reaction to this and instead shouts (not even scream) the heroine's name. There is a riot scene where people fly randomly and the rest play dandiya with weapons. Then there is the leading man who loses his sleep just because someone has a crush on his pretty fiancee, though he knows she has no interest in the other guy. Cue a sad song that had the leads moping around, taxing our patience.

Speaking of songs, they appear at regular intervals so that you can check your emails in the interim. The background score is just random pieces of instrumental scores. The dialogues are mostly pro and anti religion and propaganda, and unintentionally hilarious. Just to spice up things, you get to hear Kashmir, Mumbai riots so that you know how serious the characters are about what they are talking. The editor has the easiest job of just cut-copy-pasting.

Casting is another highlight. Hiten Tejwani plays a besotted young man, whose only purpose in the film is to look awkward and deflect any attack on his girl onto himself. Eijaz Khan as a college student is as believable as the fake scar on his neck. Then there is the debutant heroine who looks like Sonakshi Sinha's irritating cousin. All she does is smile gratingly, cry buckets and run all around the place with her arms flailing. Unfortunately for us, it's her we have to bear for the entire runtime.

I will make my verdict about this film short - Avoidable, unless you are the ones who enjoy bad schlocky films!