Hey Prabhas! Shraddha Kapoor has a new nickname for you.

Looks like B - Town just cannot get enough of South star Prabhas! After tinsel townies showering him with praise for his last venture Baahubali 2, another actor has got some really good things to say about him. Shraddha Kapoor who seems to be completely smitten by Prabhas went on to call him the "New blockbuster king". How cool is that?! Well, we certainly agree with you on that, Shraddha. Post the success of Baahubali and Baahubali 2, Prabhas has indeed turned out to become the box office king. Shraddha held a #AskHaseena session on Twitter where fans from across the world asked her random questions. One fan tweeted to her asking, "One word about prabhas plssss #AskHaseena." And she responded with, "New blockbuster king #AskHaseena." Also Read - Shraddha Kapoor sways to BTS and Coldplay's My Universe while enjoying an auto ride in Mumbai – watch video 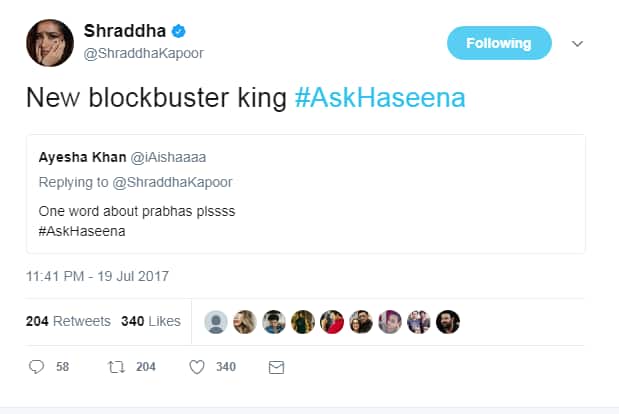 While everyone knows Prabhas is a star already in the South, audience cannot wait to see him debut in a Bollywood movie. For now, that looks like a distant dream though because no such news has come up. Also, he has bagged another South film titled Saaho, for which he will start shooting by the end of July. This film will be made on an extravagant budget of Rs 150 crore and will be shot across exotic locales. Also Read - #BLRecommends: Kota Factory 2 and more movies and series based on student life that you can stream now on ZEE5, Netflix, Amazon Prime Video and more

In other news, Shraddha is next going to be seen in Haseena Parkar, a biographical crime film, that's based on the life of real - life gangster Dawood Ibrahim's sister Haseena Parkar. The trailer was out a couple of days ago and it looks damn intriguing. We have always seen Shraddha do girl - next - door characters and it's kinda interesting to see her turn into a badass villain in this one. Her last two films OK Jaanu and Half Girlfriend tanked miserably at the box office. So Haseena is indeed a crucial film for the actress. Also Read - Deepika Padukone, Kangana Ranaut, Alia Bhatt and more: TOP 10 Bollywood actresses with the most number of hits