Shraddha Kapoor was seen in a sky blue embroidered lehenga. Here's a look at some of the unseen pics and videos.

Shraddha Kapoor looked like a dream as she attended cousin Priyaank Sharma's wedding with Shaza Morani in Maldives. She was seen in a sky blue embroidered lehenga. Here’s a look at some of the unseen pics and videos. Also Read - Radhe Shyam: Prabhas-Pooja Hegde starrer to clash with Bachchan Pandey, Shamshera? Here's what we know [EXCLUSIVE]

Here she can be seen twirling at the beach. She merged with the sea. Also Read - Shamshera: Ranbir Kapoor, Sanjay Dutt starrer heading for OTT release? Director Karan Malhotra REVEALS the plan

What is a wedding without family pics? 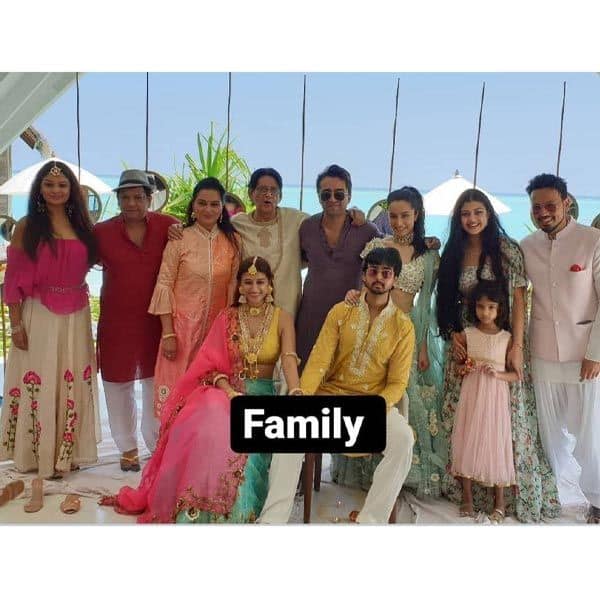 The actress seemed to be actively participating in the wedding

Here's Shraddha with the bride squad

Earlier, in an interview with BollywoodLife, Shraddha Kapoor spoke about Naagin. Expressing gratitude to the audience and disclosing when we could expect the shoot to begin, Shraddha Kapoor said, “Firstly, I have to say that the moment Nagin was announced, it received so much love just for the announcement that I want to say, 'Thank you, thank you so much for that.' Of course, that has enhanced the pressure on us and we hope to live up to all the expectations. The shoot for Nagin is going to start in some time, just a little while is remaining (to take the film on floors). Of course, it's an extremely huge project and there are many factors that are a part of it. So, the preparations are on, but I can say that it will definitely start in some time.”

Opening up on working with both Luv Ranjan and Ranbir Kapoor in Luv Ranjan’s next, the actress said, “I'm so excited to be working with Luv sir. I think he's such a brilliant Director, and the kind of movies he has made, the way they connect with the audience, it makes me more excited that I'm getting to work with him, and of course, that I'm also getting to work with Ranbir. I was really looking forward to working with Ranbir — I only heard word what an amazing actor he is to work with on set, and I have to say that whatever praises I heard about him, they're all true. After shooting a little bit in Delhi, I can say that the ongoing process has been a completely unique experience. Also, it's almost after one year I'm shooting for a film, so I'm so, so, so excited about getting back.”