Here's what happened down south this week. 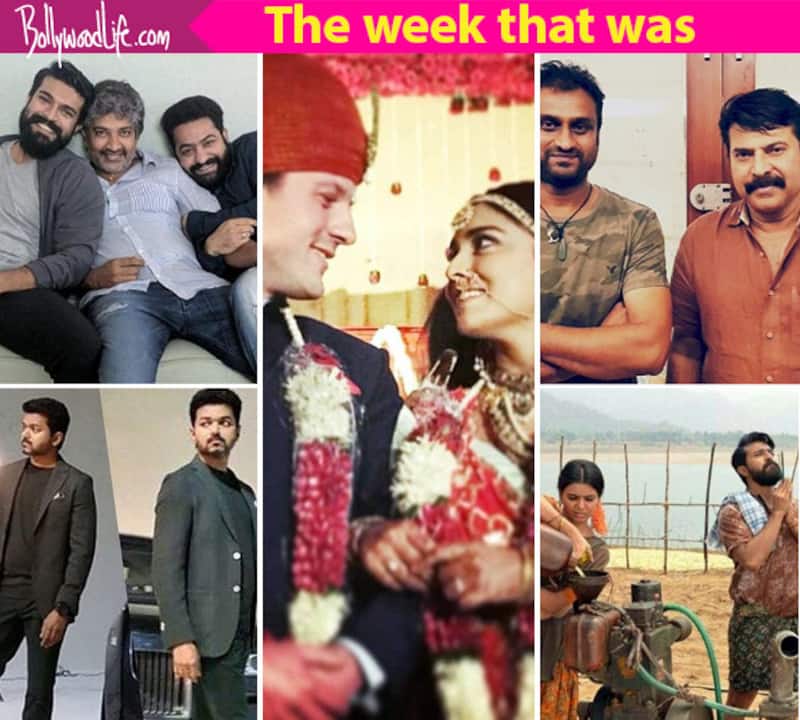 The week began with the Rangasthalam trailer. The upcoming Telugu film starring Samantha Ruth Prabhu and Ram Charan has garnered huge buzz for its intriguing story-line. The promo has made everyone eager for its release. Shriya Saran's wedding to Andrei Koscheev also made big news. It was a grand affair in Udaipur attended by family and close friends. Despite the Tamil Cinema Strike, Thalapathy 62 continued shooting in Chennai. This has not been received well by other producers who stopped shooting keeping the ban in mind. Mammootty is set to play the late Andhra CM YSR in an upcoming biopic. SS Rajamouli has finally announced his next project! Now that we have given you the highlights, here's what happened this week: Also Read - Trending South News Today: Dhanush's Captain Miller first look, Prabhas-Anushka Shetty to reunite and more

Rangasthalam trailer: The upcoming Sukumar film starring Ram Charan and Samantha Ruth Prabhu is much awaited by fans. Apart from the fresh pairing, the unusual story set against a rural backdrop has caught everybody's attention. It's not just a love story but also a village fighting for their rights against the tyrannical President. The movie is set to hit theaters on 30th March. Also Read: Rangasthalam trailer: Samantha Ruth Prabhu and Ram Charan’s film is the perfect mix of a love story and a commercial entertainer Also Read - South News Weekly Rewind: Pooja Hegde’s shocking revelation about lowest point in career; Suriya invited by the Oscar Academy and more

Shriya Saran - Andrei Koscheev wedding - South Sensation Shriya Saran got married to Russian beau Andrei Koscheev on March 19th. While earlier reports suggested the two tied the knot in an intimate ceremony in Mumbai on March 12, it was far from the truth. Their wedding was a 2-3 day grand affair in Udaipur. After a fun Sangeet night, the two got married in a traditional Hindu ceremony. Andrei also enacted a filmy dialogue at the time of their wows, just for his ladylove Shriya Saran. Also Read: [INSIDE PICS and VIDEOS] Picture perfect moments from Shriya Saran – Andrei Koscheev’s big fat Indian wedding Also Read - Flashback Friday: When RRR star Ram Charan shared his views on casting couch in South Indian film industry after Sri Reddy's stripping controversy

Thalapathy 62 - Ever since the ban on March 16th, several films had come to a halt despite being in the middle of shooting schedules. But the crew of Thalapathy 62 was found shooting at Victoria hall despite the ban. The TPFC treasurer clarified that the makers had taken special permission to complete this schedule as the crew members were from Hyderabad and would not be available for a month. However, the reasoning did not convince producers of other films, who believed the TPFC should have informed that films could be exempted from the ban if they had valid reasons.

Mammootty - Malayalam superstar Mammootty is making a comeback to Telugu cinema after 25 years. He is all set to star in a biopic based on the late Chief minister - YSR. The film will be directed by Mahi V Raghav.

#RRR - After flooring us with a blockbuster last year, the genius filmmaker has finally announced his next. Titled #RRR for now, the filmmaker has also confirmed the cast - Ram Charan and Jr NTR. Reportedly the film is about two brothers. It is expected to go on floors this October.