Comedian Siddharth Sagar, who is best known for playing Selfie Mausi in The Kapil Sharma Show grabbed the headlines yesterday after it was reported that he has gone missing. Somi Saxena, who is reportedly Siddharth’s close friend revealed through a Facebook post that he has been missing for a while now and was last seen in November. Posting a collage of Sidharth's pictures from the show, Somi wrote, “You guys remember him Siddharth sagar aka selfie Mausi urf Naseer this guy is missing since 4 month last seen on 18 November 2017. Nobody knows where he is. He is my very good friend please help me find him spread this as much as u can." (sic) The post, which is now deleted caused panic as many people started to reach out to Siddharth, who finally posted a video message on his Instagram today declaring he is safe. Also Read - Kapil Sharma, Jasmin Bhasin, Karan Mehra and other stars who once threatened to quit their popular TV shows but stayed back 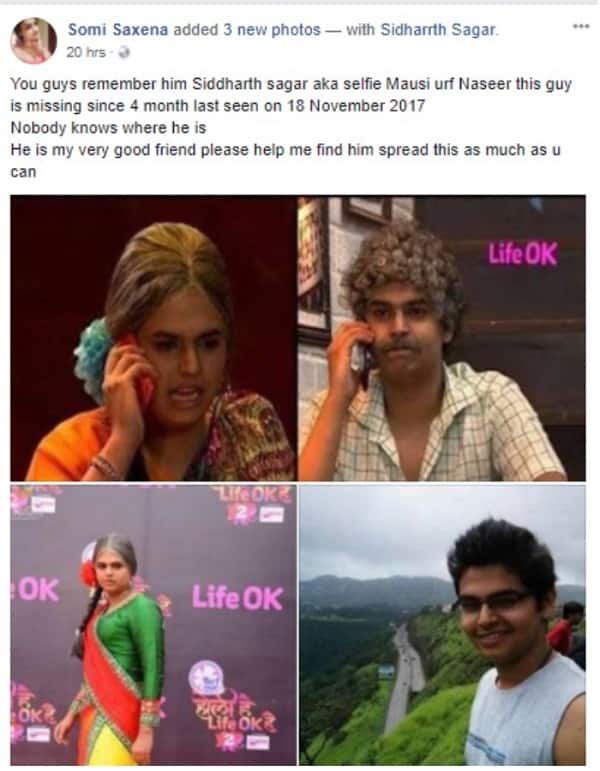 Also Read - The Kapil Sharma Show to replace Indian Idol 12 in August? Here's what we know

right now im in safe hands ...will update you guys in 2-3days

As you saw, in the video he mentions that he ever since the news came out, he has been getting a lot of calls and messages from his friends and the media. He also revealed that he has been through a lot because of his family, who created problems for him and mentally harassed him. Siddharth concluded by saying that he is safe and he will talk to the media and explain in detail that what exactly happened with him.

There were reports that not just Siddharth, his parents have been missing too. According to a report in divyamarathi.bhaskar, a close friend, on condition of anonymity, revealed that Siddharth didn't share a good rapport with his mother, who was apparently only interested in the young comedian's money. Stay tuned to BollywoodLife as we bring you more updates on this.