Sidharth Malhotra celebrates his birthday today and his Mission Majnu co-star Rashmika Mandanna made a special request to him in her birtdhay note.

It is Sidharth Malhotra's birthday today and social media is flooded with special wishes for the handsome hunk. Many of his industry mates took to their social media accounts to wish the star. But it is Pushpa actress Rashmika Mandanna's birthday wish that caught our attention. Rashmika and Sidharth are soon to be seen in a Bollywood film called Mission Majnu. The actress is stepping her foot into Bollywood and Sidharth is her first co-star. Taking to her Insta stories, Rashmika Mandanna made a special request for Sidharth. Also Read - Madhuri Dixit Birthday Special: From Ranbir Kapoor to Tiger Shroff - These hunks described her as their ultimate crush

Rashmika shared a sweet selfie with Sidharth Malhotra on Insta stories and also mentioned that they need to take more of pictures together. Check out the photo below: Also Read - After Rashmika Mandanna and Nayanthara; Samantha Ruth Prabhu, Keerthy Suresh and more South actresses we would like to see in Bollywood films 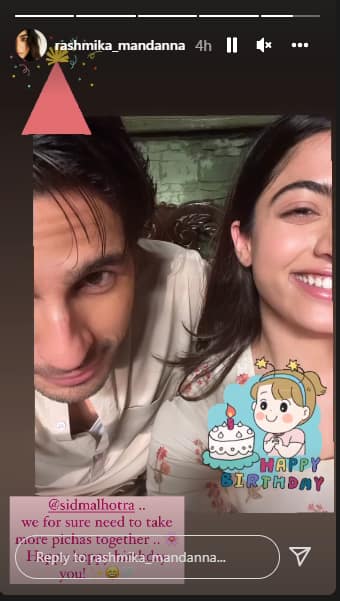 Another celebrities who penned sweet notes for Sidharth Malhotra on his birthday are Katrina Kaif, Anushka Sharma, Rakul Preet Singh, Milap Zaveri, and others.

On the work front, Sidharth Malhotra has YODHA as his next film apart from Mission Majnu. It was recently that the star started shooting for the film which is directed by y Sagar Ambre and Pushkar Ojha. He also has Thank God co-starring Rakul Preet Singh in the pipeline. The actor sure has a busy year ahead.

He was last seen in Shershaah which turned out to be one of the most successful films of his career. The film starred Kiara Advani alongside Sidharth. Apart from his movies, Sidharth has been making to the headlines for his love life too. He is said to be dating Kiara Adavani in real. The two stars even took a holiday together during the New Years.