Sidharth Malhotra REACTS to Kiara Advani's latest Instagram post amidst breakup rumours; all is well between the two?

There have been reports that Shershaah actors Sidharth Malhotra and Kiara Advani have parted ways. However, Sidharth's recent gesture makes everyone wonder if the breakup reports are false.

A few days ago, it was reported that Sidharth Malhotra and Kiara Advani have parted ways. The actors, who were in a relationship for around three years, met on the sets of Shershaah, and reportedly started dating each other during the shooting of the film. Their chemistry in the movie was loved by one and all, and their fans were happy to read the reports of them being in a relationship. While Sidharth and Kiara never made their relationship official, the two were spotted together at many times. Also Read - Cannes 2022: TV divas Hina Khan and Helly Shah speak about facing discrimination for being at the film festival

While talking about their breakup, a source had told BollywoodLife, "Sidharth and Kiara have parted ways. The couple has stopped meeting each other as they have fallen out of love. The reason behind their separation is best known to them. But their breakup is indeed disheartening. Sidharth and Kiara bonded very well and there was a time where many thought they'll end up getting hitched, however, fate decided otherwise." Also Read - Nick Jonas opens up on welcoming first child with Priyanka Chopra Jonas; says, ‘Malti’s got a little heart face’

After the reports of their breakup, the two shared cryptic posts on social media. Check out their posts here... Also Read - Tony Kakkar, Tejasswi Prakash, Shoaib Ibrahim, Ashnoor Kaur - Celebs who bought swanky cars in the recent past [VIEW PICS]

Meanwhile, a recent gesture of Sidharth on Instagram has made everyone wonder whether the two have actually broken up. Kiara posted a video about the promotions of Bhool Bhulaiyaa 2, and Sidharth liked the video. Well, this might also be just a friendly gesture, but the reports of their breakup have surely made the actors’ fans upset. 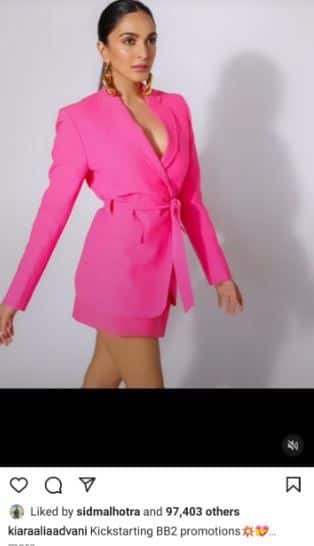 Talking about their movies, Kiara will be seen in films like Bhool Bhulaiyaa 2, Jug Jugg Jeeyo, Govinda Naam Mera, and RC 15. Bhool Bhulaiyaa 2 is slated to release on 20th May 2022, and the trailer of the film will be launched today. Meanwhile, Sidharth has films like Thank God, Mission Majnu, and Yodha. The actor will also be making his web series debut with Rohit Shetty’s Indian Police Force.