Read on here to find out why Simbu starrer Anbanavan Asarathavan Adangathavan is super mysterious and the importance of a particular number!...

A couple of days back, Kollywood actor Silambarasan unveiled the titled of his next film with director Adhik Ravichandran as Anbanavan Asarathavan Adangathavan. A special super mysterious 'title look' of the film was also released, which has really piqued the interest of the people. One thing is clear from the title and the poster, that number three has a special significance for the movie, here's why... Also Read - WWE: Sin Cara Makes First AAA appearance after leaving WWE despite non-compete clause – watch video

The title of the film itself, Anbanavan Asarathavan Adangathavan displays three very distinct qualities. Anbanavan means caring, Asarathavan means unshakable and Adangathavan means untamable. So basically, these three qualities will possibly define STR in the film. The film also has been given a cool abbreviation - AAA. Also Read - Another complaint filed against Simbu with Nadigar Sangham by AAA producer Michael Rayappan 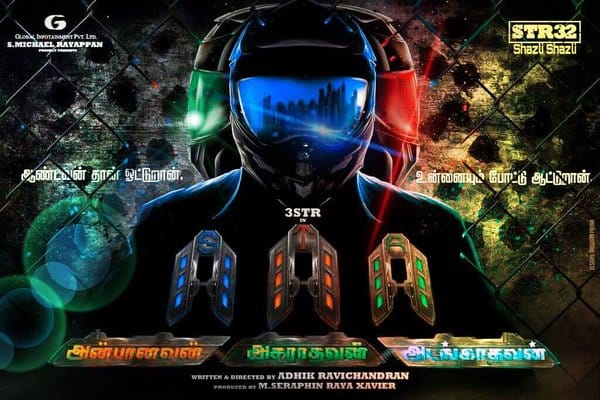 The super intriguing first look of the AAA is making the waves on social media. The poster shows three helmet clad men facing in three different directions. But the threes don't just end there. If you look closely on the reflection of each helmet, you will find three different locations in them. The helmet on the left displays the famous Anna Tower in Chennai. The one in the middle reflects Dubai whereas the one in the end shows Meenakshi temple of Madurai.

Keeping in line with law of three, there are talks that AAA will have three heroines. The names of the three actresses who have been roped in to romance Simbu still remains a mystery. The director and the crew are really secretive about the cast and the official announcements can be expected soon.

So, for some reason, the makers of the film have given special importance to the number three. We will have to wait for the teaser and trailer to see if any light will be shed on this mystery.