The #faceappchallenge has taken the whole world by storm. And the newest one to take up the challenge is Smriti Irani aka Tulsi of Kyunki Saas Bhi Kabhi Bahu Thi. She tagged Ekta Kapoor in a hilarious post and the banter that followed was epic!

Admit it, even you were intrigued with this trending #faceappchallenge. We have many celebs in their old age and even in their buoyant youth. Fan clubs have made this a huge trend on social media and since then, even celebrities have been giving it a try. It was fun to see various actors and actresses from both TV and Bollywood taking up the challenge. Bollywood celebs like Arjun Kapoor, Varun Dhawan, Ayushmann Khurrana gave it a try while television celebs like Ravi Dubey, Karan Patel, Gautam Rode, Pearl V Puri and others too gave it a shot.

And the newest one to join the wagon is our very own Tulsi aka Smriti Irani. And her #oldagechallenge will bring back some fond memories from the past if you had been a loyal fan of Kyunki Saas Bhi Kabhi Bahu Thi. The Women and Child Development minister gave a hilarious twist to the challenge and uploaded a picture from her Kyunki days when she had to age on screen for her show. While it was funny as hell, it also brought some memories. Smriti's caption for the post read, "#when @ektaravikapoor gets to you before the #faceappchallenge ?#tbt." Have a look at Smriti's post here:

And after this hilarious post, how could Ekta, the producer of the show, stop herself from commenting on the picture? The TV Czarina and Smriti's BFF expressed her delight with a caption that read, "....and u do it like a boss!!!" She also asked the actress about the leap, "It was d third leap na ?????" Smriti's reply to the same will crack you up big time! She wrote, "@ektaravikapoor there were so many leaps I forgot ??" 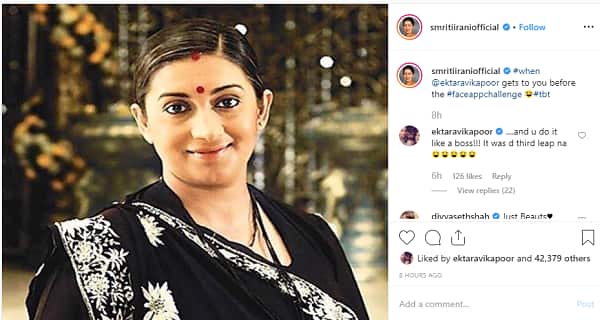 Now have a look at Smriti's reply to Ekta's comment here: 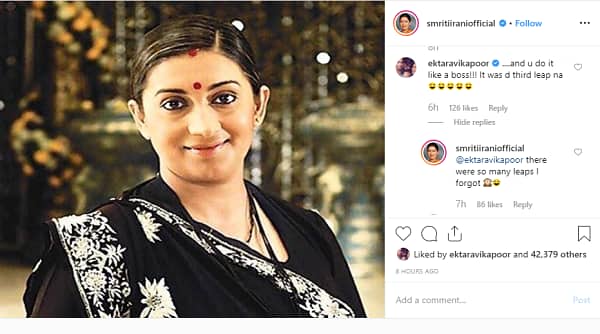 Their banter didn't end there! The ladies discussed the leaps and how Ronit Roy still looked younger than Tulsi in the show even after numerous leaps. Ekta joked that she made Smriti age onscreen almost 7 times, but it worked well for the show. Her comment on the picture read, "@smritiiraniofficial hahhahahhahah i made u do at least 7 n every time it rated." Smriti replied, "@ektaravikapoor I grew to be 120 years old while @ronitboseroy kept his hair black." Have a look at their comments here: 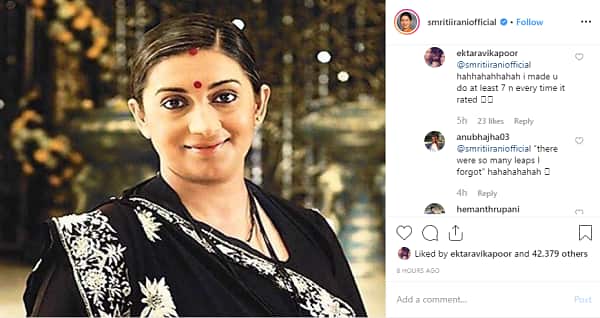 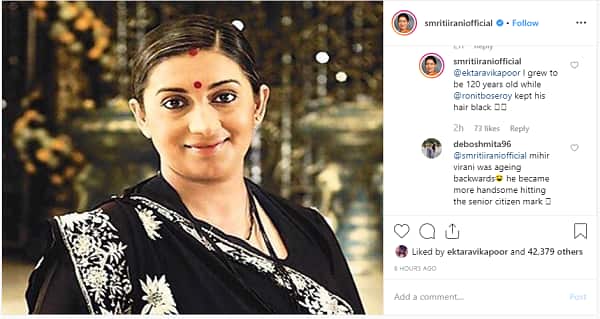 Did you like Smriti's #faceapp or #oldagechallenge? Let us know what do you think about Ekta and Smriti's fun banter by tweeting to us @bollywood_life.