The rumours of her pregnancy had started ever since Sonam Kapoor landed in Mumbai in July after staying in London with her husband Anand Ahuja for almost a year.

Sonam Kapoor landed in Mumbai in July after staying in London with her husband Anand Ahuja for almost a year. She broke down at the airport upon seeing her father Anil Kapoor who came to receive her. She gave him a warm hug and headed towards their car together. Also Read - Kareena Kapoor Khan gives a glimpse of her 'special' birthday celebrations and the promise she has made to herself

However, her loose outfit over a jacket left fans wondering if she was pregnant with her first child. Many people were of the opinion that Sonam was being cautious while she was giving a hug to her father at the airport. However, Sonam has put an end to all the rumours of her pregnancy in style. Also Read - WTF Wednesday: ‘Are you pregnant?’ Dear fans, stop asking women in Bollywood and TV this cliché question

Yesterday, Sonam took to her Instagram to share a picture after her workout session. She was seen flaunting her well-toned midriff and needless to say, all the gossipmongers can now rest and do away with the talks about the actress trying to hide her baby bump behind loose clothes. Also Read - Shocking and honest confessions by Bollywood actresses that went viral! 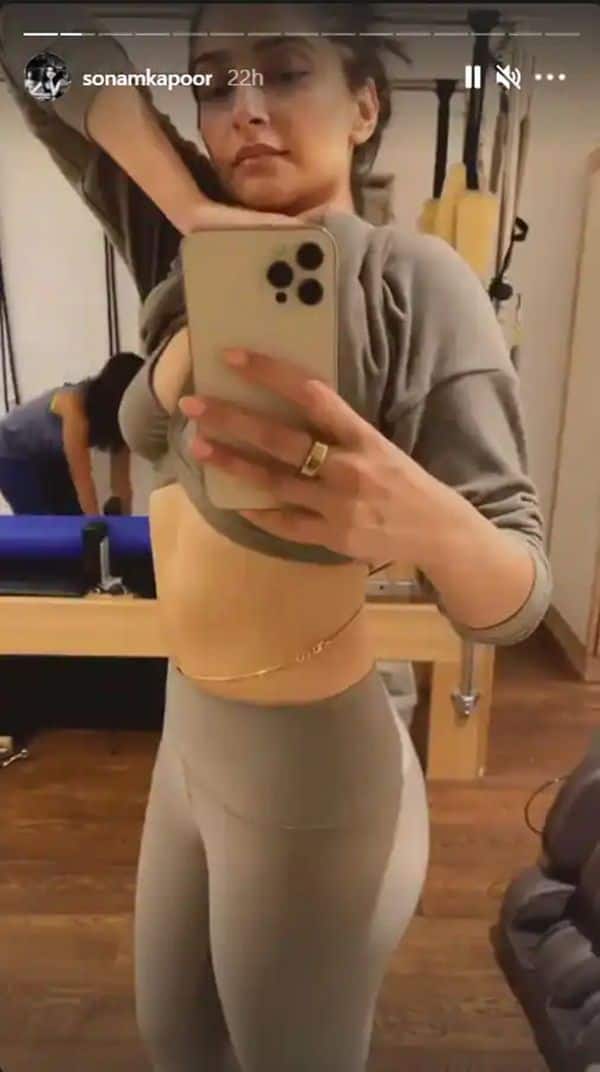 Earlier too, Sonam had debunked the rumours about her being pregnant, with a post on social media. She posted a clip on Instagram story where she talked about her first day of getting her periods. In the clip, the actress was seen sipping on ginger tea and holding a hot water bottle. "Hot water bottle and ginger tea for first day of my period," she wrote as caption on the post.

Sonam's sister Rhea Kapoor recently got married to her long-time boyfriend Karan Boolani in a low-key ceremony. The newlyweds were seen coming out in a car quite late in the evening after their wedding. They were dressed simply and the wedding was said to have been a simple, "spiritual" affair. Unlike a Punjabi wedding, it was not preceded by nights devoted to the ‘mehndi' and ‘sangeet'. Rhea did not have ‘mehndi' on her hands, but she sported a striking engagement ring.

The arrival of Sonam Kapoor, looking picture-perfect in a shimmering light-blue outfit, along with her shoe designer husband Anand Ahuja, looking natty in Jodhpurs, sent the paparazzi into a tizzy.

Others spotted entering the Juhu residence of the Kapoors included Rhea's grandmother Nirmal Kapoor, her uncles Boney and Sanjeev (who came with his wife Maheep, who was most recently seen in 'Fabulous Lives of Bollywood Wives', and son Jahaan), and her aunt Reena Marwah with her husband Sandeep.

Rhea, who's the younger daughter of Anil Kapoor and his costume designer wife Sunita, is known for producing films such as 'Aisha', 'Khoobsurat' and 'Veere Di Wedding'. Karan Boolani has been working with Anil Kapoor's production house and most recently co-directed the Netflix series 'Selection Day' based on Aravind Adiga's novel of the same name.