Sonarika Bhadoria is not someone who will take anything from haters. The actress gives back a strong reply to those who tried to pull her down!...

Looks like the bikini babe is in a no nonsense mood

Sonarika Bhadoria is an actress who is known for her role of Parvati in the famous TV show Devon Ke Dev Mahadev, but here is the actress in a never before seen avatar. The TV celeb set the screen on fire in a scorching red bikini. She was looking simply stunning in a red bikini with a flowery skirt that left very little to imagination. The curvaceous beauty has certainly got the temperatures soaring all over! But her bold and new look didn't go down so well with everyone. Also Read - Sonarika Bhadoria looks red hot in this stunning gown - view pic

Seeing her in such a bold and beautiful avatar was quite a shock for many, for she was trolled for posting these bikini pics. But, the actress did not take it so lightly and she deleted some of these pics and came up with a very scathing reply for all those who trolled and cursed her for posting these pics. She said that she is not mature enough to handle all the negativity. It was evident that she was really upset with all the trolling and really gave it back in style. Also Read - 7 hot pictures of Sonarika Bhadoria that will make you sweat this winter

It is indeed a bit of a surprise in seeing Sonarika in such a bold and modern avatar after seeing her as the divine Parvathi. Other than appearing in TV, she also did a handful of Telugu movies, the latest ones being Speedunnodu and Eedo Rakam Aado Rakam. Also Read - Shani, Hanuman, Santoshi Maa - Here is how TV's divinity looks in real life!

Here is the message from Sonarika in its entirety: 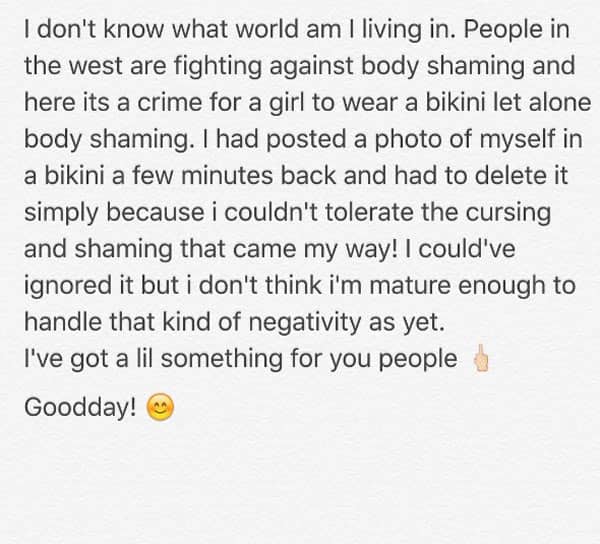