Sorry Deepika Padukone, but fans believe Ranbir Kapoor has a better chemistry with Katrina Kaif on the ramp!

Ranbir Kapoor has a better chemistry with Katrina Kaif than Deepika Padukone.

The verdict is finally out and here's the answer to the question that captured our mind last week. Ranbir Kapoor and Deepika Padukone made headlines when they walked together for designer Manish Malhotra at Mijwan fashion week 2018. It took 11 years for this former couple to come together and grace a ramp for any designer. Previously RK Jr had flaunted Rohit Bahl's creation with his former girlfriend Katrina Kaif, way back in 2009. We agree there was zero chemistry between the Tamasha pair when they walked at Mijwan 2018, especially since they are such a great on screen pair. They look immensely good together and we expected the same when they stepped out to grace the fashion show. But unfortunately our expectations faltered when we could only see them sharing some cold vibes. Also Read: Mijwan 2018: Ranbir Kapoor and Deepika Padukone walk for Manish Malhotra giving us a moment to cherish forever; view pic Also Read - Throwback to when Shah Rukh Khan got schooled by daughter Suhana Khan for his infamous Wankhede Stadium row – watch video

Now let's go back and reminisce the time when the Rajneeti pair - Ranbir and Katrina walked together for Wills Lifestyle Fashion week in 2009, exactly nine years ago. He looked smitten by her and she walked with all the confidence. Now this was right before the couple started dating and fans never knew that this would be the first and the last time when the star would come together to appreciate an art for any designer. But definitely his chemistry with Kat was way better than that with Deepika, and even fans think so. We conducted a poll for Ranbir's fans to figure out who they think looks better with him. And yes, as expected, Katrina outdid Deepika in this race. The Tiger Zinda Hai actress received 52 per cent votes while the Padmaavat actress managed to bag 48 per cent. Though Ranbir - Deepika is a better jodi on screen, fans think he looks best with this London beauty. Also Read: [Video] Ranbir Kapoor and Abhishek Bachchan turn Katrina Kaif’s Kala Chashma into Aishwarya Rai’s Kajra Re Also Read - Trending South news today: Sanjay Dutt's deadly new look from Yash's KGF 2 unveiled, Prabhas wraps up the shooting of Radhe Shyam and more 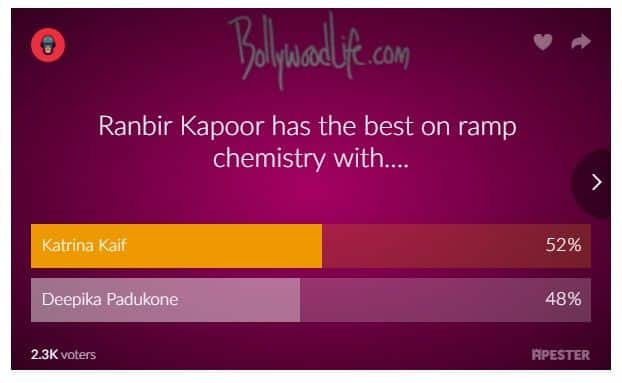 Talking about his ramp walk with Katrina in 2009, Ranbir said he was scared to walk with Katrina. “I was pretty nervous to face the stage with a veteran model like Katrina. The idea of walking the ramp with her made me go blank every time I thought of it. It was she who led me beautifully to the stage making me feel comfortable with her,” he had said.