After dazzling at the 68th Cannes Film Festival, Sonam Kapoor is back home...

Sonam Kapoor made an array of gorgeous red carpet appearances at the Cannes Film Festival this year. She wore some electric outfits and chose designers from Western haute couture to Indian! We loved her royal blue Ralph and Russo gown for it's grace and her Abu Jani and Sandeep Khosla ruffle saree for it's insane sexiness! And although her Elie Saab gown from her second red carpet appearance was not received too well by the social media fraternity, we thought she looked like a vision! After the 3 day long glamour marathon, Sonam has finally touched base and she will soon resume shooting for Ram Madhavani's Neerja Bhanot biopic! Also Read - Move over Urfi Javed - Priyanka Chopra, Aishwarya Rai Bachchan and other actresses have made the biggest fashion disasters that can never be forgotten 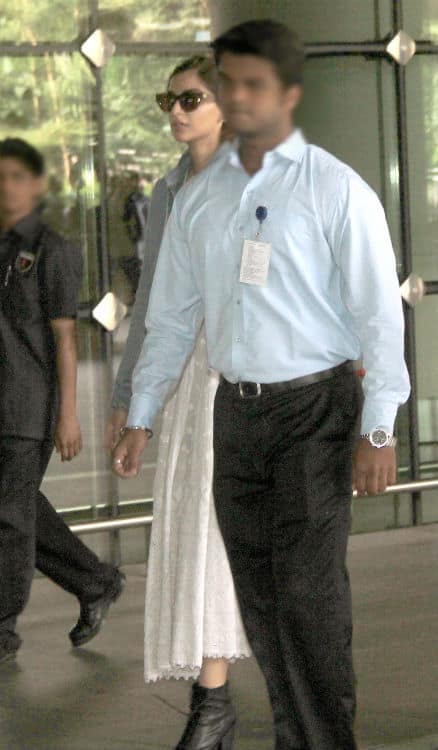 Sonam Kapoor spotted at the airport

Sonam is currently up to her elbows in work. She is shooting for Neeraj, then her film Prem Ratan Dhan Payo opposite Salman Khan is also set for release, she is also researching for Battle for Bittora which also stars Fawad Khan. Her clothing line Rheson is also to release in September this year. The fashionista is juggling her film commitments with her brand endorsements. Also Read - Kangana Ranaut’s EPIC reaction to Parag Agrawal replacing Jack Dorsey as Twitter CEO

Sonam sure has a busy year ahead of her but we know that she will sail through it with ease and brilliance! Check out this bonus video of her getting ready for her second red carpet appearance at Cannes! Also Read - Vicky Kaushal-Katrina Kaif, Shah Rukh Khan-Gauri Khan and more: Net worth of celebrity couples will leave you shell shocked