Sri Reddy Leaks: Tollywood celebs who have been accused of sexually exploiting the Telugu actress

There's no stopping to Telugu actress Sri Reddy who is on a mission to expose the ugly side of the film industry. What started by stripping naked on the streets to protest against the alarming rise of casting couch to making explosive revelations about industry biggies asking for sexual favours, Sri Reddy is baring it all. Although the film fraternity is shocked and is trying every way to oppose this protest by even denying Sri Reddy's membership in the Movie Artists Association. There are many across the nation who are in fact coming out in support of the actress for braving all odds, only to fight for justice and to fight for the safety, respect of every women working in the industry. Also read: Sri Reddy asked to vacate her house by the owner post her topless protests against casting couch in Tollywood Also Read - Trending South News Today: Sarkaru Vaari Paata box office collection inflated, Naga Chaitanya starrer Thank You locks release date and more

While we don't know what's going to be Sri Reddy's next bomb of revelation. Here's all that she has exposed about the industry as of now by going on a public platform. Mind you, she's not only dragging big names in this casting couch controversy but is also sharing proofs to validate her point. Check out, one shocker at a time: Also Read - Malayalam model Shahana’s death, Dileep sexual assault and kidnapping case, Vijay Babu rape case and more crimes that shocked the South film industry

The biggest and the latest allegation by Sri Reddy is that against Abhiram Daggubati, the son of leading producer Suresh Babu and younger brother of Rana Daggubati. In an interview with News 18, she said "Suresh Babu's son cheated me so badly. The studio belongs to the government and it is meant to help and support talented people. They have to use it in a proper way. This Suresh Babu's son took me to the studio and f****d me so badly in the studio only." She even shared intimate pictures with Abhiram to prove her point. Strange that Abhiram has still not responded to this shocking accusation.

Popular singer SreeRam Chandra has been not spared either. The actress has shared screenshots of their alleged conversation on WhatsApp. In the chat, the singer is seen expressing a desire to meet her, while also demanding her hot, personal pics. Below is one of the many chats exchanged:

In an interview, Sri Reddy indirectly claimed that Telugu director Sekhar is very much involved in casting couch. However, the director soon responded to her allegations and also threatened to take legal action. Here is the statement that he posted on Twitter: 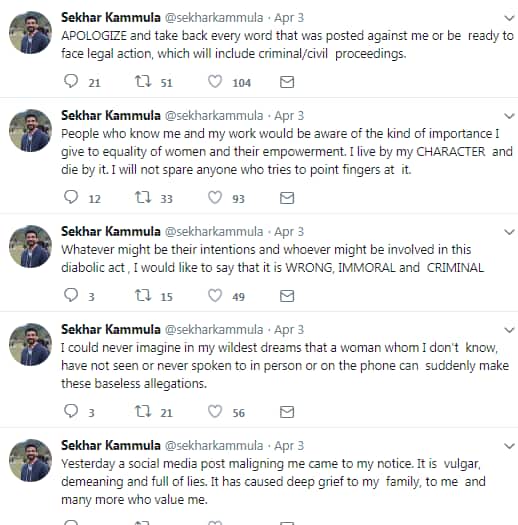 In a debate on Telugu TV channel Mahaa News, Sri Reddy claimed how Telugu director-producer-screenwriter Kona Venkat had asked her to meet at a guest house and promised to introduce her to VV Vinayak. However, he ended up exploiting her sexually. Below is the interview we are talking about:

Kona Venkat however has denied the allegation by taking up to Twitter. He wrote: 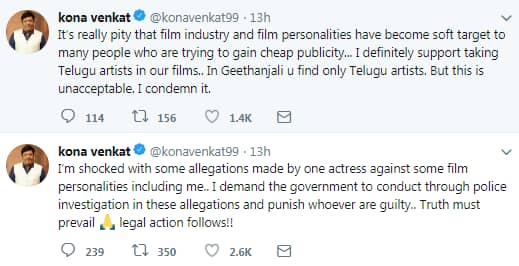 It's left to see who is going to be Sri Reddy's next target. Keep watching this space for more updates on this hot story.