Sridevi no more: Amitabh Bachchan, Rishi Kapoor cancel the shoot of their film 102 Not Out as a mark of respect

Amitabh Bachchan and Rishi Kapoor, who are starring together in 102 Not Out were suppose to shoot a song yesterday (February 25). However, as a mark of respect for Sridevi, who passed away on Saturday (February 24) evening, the song shoot was cancelled. "Yes as a mark of respect to the sudden and untimely demise of our legendary actress Sridevi, we decided to cancel our today's song shoot of 102 Not Out. May God give peace to her soul and strength to her family," director Umesh Shukla told IANS. Also Read - Amitabh Bachchan, Shah Rukh Khan, Ranbir Kapoor and more celebs who turned into unrecognisable characters using prosthetics

We know that Amitabh is very active on Twitter. The tweet that he sent out just a couple of hours before Sridevi passed away made us believe he had an inkling something unpleasant was about to happen. Bachchan had tweeted, “T 2625 – न जाने क्यूँ , एक अजीब सी घबराहट हो रही है !!” (Don’t know why I am feeling really nervous). And few hours later, Sridevi's demise was confirmed. People on social media started freaking out at that moment. They put two and two together saying that Bachchan had a premonition about Sridevi’s death. Also Read - From Ranbir Kapoor to Ranveer Singh: 6 Bollywood celebs and their favourite football clubs 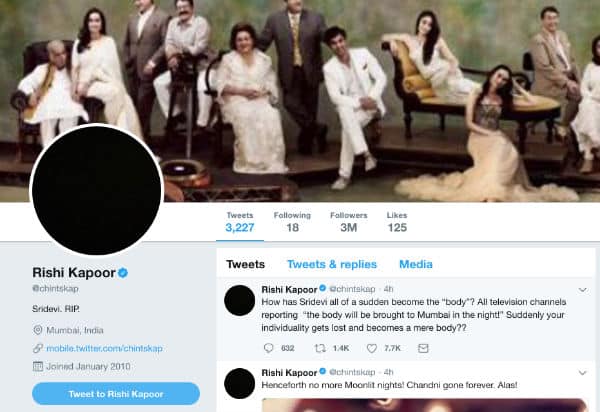 Sridevi along with husband Boney Kapoor and daughter Khushi was in Dubai to be a part of nephew, Mohit Marwah’s wedding celebrations. After the wedding, Sridevi decided to extend her stay, while Boney and Khushi returned to Mumbai. Their elder daughter Janhvi couldn’t be a part of the wedding as she was busy shooting for her upcoming debut film, Dhadak. Boney went back to Dubai to surprise her on Saturday. Sridevi suffered a massive heart attack and was announced dead by the doctors.

The latest update is that Sridevi's autopsy has been completed in Dubai and her mortal remains will be flown to Mumbai in on a chartered plane. The funeral will take place today afternoon in Pawan Hans crematorium, Vile Parle, Mumbai.