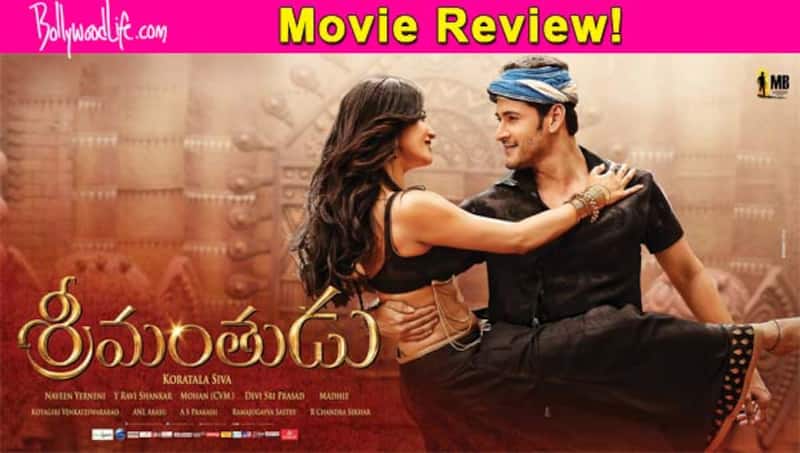 The film drags post interval, ruining all the good impact which first half had managed to create

Superstar Mahesh Babu's last hit,Seethamma Vakitlo Sirimalle Chettu, was in 2013, for which he won Filmfare Award. But since then he has delivered two box office duds in the name of Aagadu and 1: Nenokkadine. And he is back with Srimanthudu!With Shruti Haasan's oomph factor and Kortala Siva's skillful direction at his aide, will Mahesh Babu hit the box office jackpot that was evading him for so long. Lets find out. Also Read - Samantha Ruth Prabhu, Rashmika Mandanna, Sai Pallavi and more: Meet the TOP 10 prettiest South Indian Actresses

What's it about: Also Read - Mahesh Babu to cut his remuneration and adopt the profit-sharing model for the SS Rajamouli film? Here's what we know

Harsha( Mahesh Babu) is the only son of business tycoon Ravikanth (Jagapathi Babu). But instead of focusing on his dad's multimillion business, Harsha studies Rural Development course where he falls for fellow student Charuseela. But Charu rejects Harsha's proposal when she finds out that he is the son of Ravikanth, who had caused harm to her village Devarkotta. This inspires Harsha to go back to the village and help the poor farmers who.are struggling under the oppression of Union minister Venkataramana's brother. Soon he finds how is father was framed in a conspiracy by Venkataramana and his brothers. From here onwards, the movie tells the same old story of hero bashing villains and saving the poor and needy. Also Read - Before Shruti Haasan, Katrina Kaif, Kiara Advani and more Bollywood actresses proudly flaunted their bloated faces

The film hugely relies on the star power of Mahesh Babu and he has not let down his fans by giving an cool and earnest performance. Mahesh Babu dances and fights in some style and shares awesome rapport with Shruti Haasan. Infact, the lead pair's romance is one of the biggest plus points of Srimanthudu. Shruti Haasan pulls off her role convincingly looking pretty and acting as a catalyst for hero's journey to greatness. Jagapathi Babu as Mahesh's dad has given a commendable performance and his scenes with Mahesh Babu are shot wisely by the filmmaker. Director Kortala Siva shows that he is a class apart especially with the way he has skillfully crafted the first half. Unlike Aagadu, Srimanthudu doesn't have cheeky one liners and sarcastic undertones, which makes it likable for family.audience. Action in the film stands out but there is this one fight sequence at wedding reception that will stay with you for a while. Devi Sri Prasad's music is easy on the ears while songs Rama Rama and Chaaruseela are the high points of the film.

Every time I watch a big Telugu star's film, I pray and hope that it doesn't involve money hungry politicians, village side goons and distort villagers. But alas, I am always left disappointed as the filmmakers and these stars prefer to serve the same old stale, cliche ridden story over and over again in the name of mass elements. Srimanthudu suffers from the same age old cliches in the second half as it ruins all the good work done by first half. The villain are mostly ineffective and are there in the film to be beaten the sh*t out of them by Mahesh Babu. I wonder what is Sampath thinking playing the same bearded village don for the millionth time. Also a veteran actress like Sukanya is completely wasted in an inconsequential role. Comedians Vennela Kishore and Ali have very small roles to make any impact. Also Shruti Haasan is sidelined in the second half and the focus shifts from their cute romance to Mahesh Babu's rather boring struggle to develop the village. There are moments in the second half that might put you to sleep. Also, background score by DSP is a huge let down. VFX effects in this film is very poorly handled and is almost laughable when compared to Baahubali. Overall, Srimanthudu is a fine example of how to ruin a good film with unimaginative screenplay.

Mahesh Babu tries his best and acts his heart out but it is still not enough to make us forget the dragging second half. Having said that, Srimanthudu is not a bad film. It is just a good film which lost its way in the middle. Watch it for some kickass action and MaheshBabu-Shruti Haasan's adorable romance.!