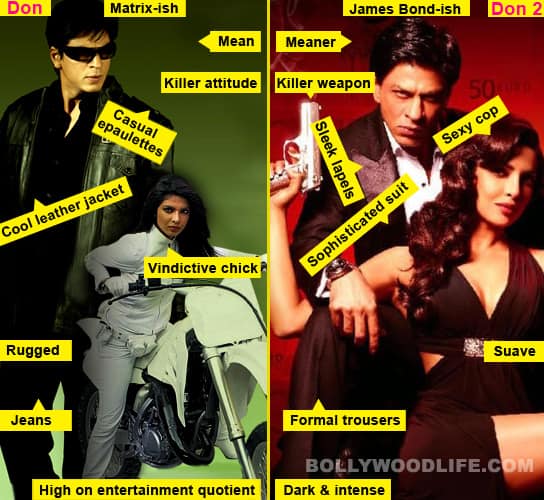 Farhan Akhtar may not have found his true metier as a singer, but when it comes to directorial abilities and making his actors look sexy, this guy is truly a winner in our eyes

Shahrukh Khan looked dapper in Don and now in the sequel, Don 2, the actor has gets all experimental by flaunting long, unkempt hair, a tattoo and spiky stubble. Jaimal Odedra, the designer of Don 2 says that all the characters have moved forward in time in the sequel, but they maintain something from Don. Now that is something we absolutely vouch for, especially after seeing the promos. The styling, the concept, the characters...every aspect has evolved in part 2, but what remains constant is the inherent sinister flavour of Don himself. And, in fact, we love it that way and hope that the sequel is a perfect concoction of thrill and evil. As the second part releases this month, we take you through an interesting comparison between the two movies. If SRK in Don is mean, then in the sequel he looks meaner. To actually know what the other entertaining elements are that Farhan has incorporated into this new film, we will have to wait to watch the stylish Don getting chased by cops from all over the world ( remember gyarah mulko ki police)...